Skip to main content
SPRING CYBER EVENT STARTS NOW: And it's a really BIG deal! Up to 88% off through 5/24>
The Heart's Lullaby - eBook
By: Jen Stephens
Stock No: WW33759EB 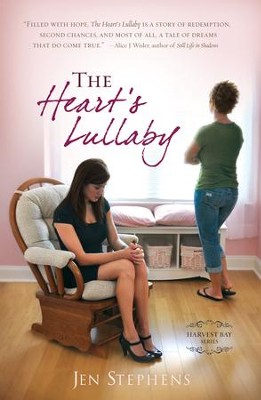 ▼▲
After two years of trying without success to have a baby, Elizabeth Truman learns that her husband may already be a father. While he spends time with the son he never knew he had, she becomes increasingly desperate to have a baby of her own. But a miscarriage causes her to question both her faith and the faithfulness of the Lord.
Amy Beauregard arrives in Harvest Bay with her ten-year-old son, harboring secrets that could destroy her chance at happiness, and the conviction that God has long since abandoned her. But while she picks up the pieces of her shattered life, things start to fall into place that she couldn't have predicted.
With Christmas approaching, an unexpected visitor and a strange twist of fate remind both Elizabeth and Amy that even in the darkest times God is guiding His children, drawing them together in a way neither could have imagined. Will their renewed faith be strong enough to withstand another devastating blow-or will The Heart's Lullaby be left unsung?

▼▲
After two years of trying without success to have a baby, Elizabeth Truman learns that her husband may already be a father. While he bonds with the son he never knew he had, Elizabeths increased desperation to have a baby of her own causes her to choose a path of deception.

▼▲
Jennifer Stephens grew up in a small Ohio town where she developed a passion for writing at an early age. She majored in elementary education at the University of Toledo and now lives in the Nashville, Tennessee, area with her husband and two daughters, where she teaches at a Christian school and is very active with the youth in her church. A member of Middle Tennessee Christian Writers, she writes in her "spare" time.

▼▲
I'm the author/artist and I want to review The Heart's Lullaby - eBook.
Back
Back