Skip to main content
The Heart's Appeal #2
By: Jennifer Delamere
Stock No: WW219214 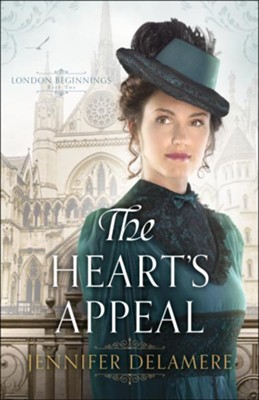 ▼▲
Strong-minded and independent Julia Bernay comes to London to study medicine and become a doctor--a profession that has only just opened up to women. She witnesses a serious accident, and through her quick actions saves the life of an ambitious young barrister named Michael Stephenson.

Coming from a family that long ago lost its money and its respectability, Michael Stephenson has achieved what many would have thought was impossible. Hard work and an aptitude for the law have enabled him to rise above his family's stigma and set him on the path to wealth and recognition. But his well-laid plans are upended when the accident brings Julia into his life.

Michael soon discovers he's met a woman every bit as stubborn and determined to make her mark on the world as he is. Sparks fly--but will they find common ground?

▼▲
Jennifer Delamere's debut Victorian romance, An Heiress at Heart, was a 2013 RITA® Award finalist in the inspirational category. Her follow-up novel, A Lady Most Lovely, received a starred review from Publishers Weekly, and the Maggie Award for Excellence from Georgia Romance Writers. Jennifer earned a BA in English from McGill University in Montreal, Canada, where she became fluent in French and developed an abiding passion for winter sports. She's been an editor of nonfiction and educational materials for nearly two decades, and lives in North Carolina with her husband.

▼▲
I'm the author/artist and I want to review The Heart's Appeal #2.
Back
Back