Skip to main content
The Heart of Memory: A Novel - eBook
By: Alison Strobel
Stock No: WW3116EB 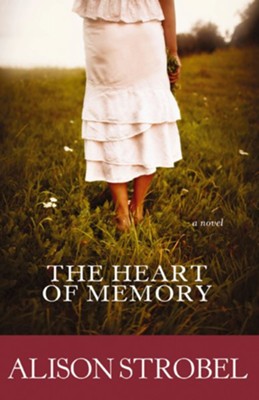 The Heart of Memory: A Novel - eBook

When beloved Christian writer and speaker Savannah Trover becomes gravely ill, she has to face the sham that her faith has become. Days before her heart transplant, she vows to change her ways and she renews her relationship with Christ. But when she awakens from the surgery, Savannah discovers that her faith has left her completely. Savannah’s husband, Shaun, is concerned about his wife's odd behavior—and even more concerned about the secret he’s keeping from her. If she doesn't bring down their ministry, then he might, losing his family in the process. A stranger may hold the answer to Savannah's recovery, but is Savannah strong enough to return to her old way of life? Can Shaun right his wrongs before word gets out? And do either one of them remember how to be who they once were—or who they want to be? In this latest relational drama from Alison Strobel, readers will explore the difference between emotional faith and life-giving truth as Savannah wonders if she can ever trust her heart again.

▼▲
Alison Strobel writes novels that explore life, love and faith. She lives in Colorado with her husband and two daughters. Visit her at www.AlisonStrobel.com

▼▲
Alison Strobel's The Heart of Memory deals with consequences and faith. Savannah Trover, a renowned Christian speaker and writer, undergoes heart transplant surgery and realizes how much she has put God to the side in her life. She resolves to focus more on Him after the heart transplant, only to discover when she awakens that her faith has been replaced with anger and disbelief in God. Now she must reconcile the supposed woman of faith she used to be with the new, angry woman she has become.

The book is written in third-person from the viewpoints of three characters: Savannah, her husband Shaun, and her daughter Jessie. Shaun keeps hiding things from his wife -- things involving their ministry -- and his secrets start to build a wall between them. Savannah's attempts to hide her own problems make the wall only higher and thicker. Jessie is angry at her mother, feeling as though she is insignificant in her mothers life. She also is frustrated because she feels as though she is invisible in her mother's shadow. In fact, Jessie's characterization as a wounded daughter is excellent, making her the most dynamic character in the book.

After the heart transplant, Savannah feels as though she has lost faith in God, but she has no clue as to why. All she knows is the anger she feels toward Him and the doubt that He even exists. As the major player in her women's ministry, she forces herself to hide her feelings and pretend that things are normal, even though they aren't. Finally, she breaks and tells her husband and best friend her problem. However, that solves nothing and only makes everything worse. Her husband is angry at his wife because he is counting on her to help him mask the growing financial issues their ministry is facing. Her friend is no help either. Finally, Savannah goes to someone with whom she broke off communication twenty years ago, in search of answers. What she finds surprises her and the readers.

Savannah as a character is slightly predictable and not very relatable at the beginning of the plot. I empathized more with her daughter. But after the heart transplant, dealing with her problems, and the changes she finds, Savannah starts to seem more like a real person. Her relationship with her daughter is strained, to say the least. Jessie has felt like she has been forced to play second-fiddle to Savannah's ministry, instead of being a major part of her mother's life. She also feels as though she has never measured up to Savannah's expectations. Savannah and Shaun keep building walls to protect their secrets and pain, almost to the point at which Shaun begins to consider the ramifications of divorcing Savannah.

Overall, the novel was good. I would have enjoyed it more if Strobel had delved more deeply into the theme of how God is faithful even when we have doubts, as found in 2 Timothy 2:13, "if we are faithless, He will remain faithful, for He cannot disown Himself." Biblical themes such as this were touched on, but only lightly. Savannah herself never really thinks on it, nor do any other character weigh in on this issue. Nevertheless, I believe women, especially older moms, will enjoy this book.  Nathan Sturgis, www.ChristianBookPreviews.com

▼▲
I'm the author/artist and I want to review The Heart of Memory: A Novel - eBook.
Back
Back