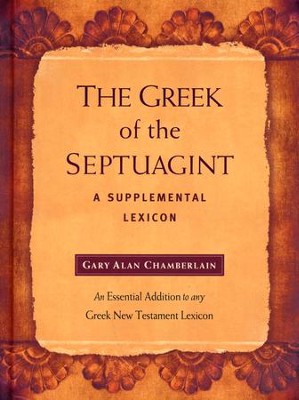 The Greek of the Septuagint: A Supplemental Lexicon

▼▲
Gary Alan Chamberlain (PhD, Boston University) has worked as a pastor, seminary professor, and private scholar, as well as having extensive experience in the world of business and finance. He is the author of The Psalms: A New Translation for Prayer and Worship (Upper Room, 1984) and of several scholarly articles on Septuagint lexicography.

"This volume is a lexicon of words from the LXX, utilizing the Rahlfs (though not the more recent Rahlfs-Hanhart) and Gottingen editions, as well as Hatch and Redpath's concordance. It is billed as "supplemental" in that it treats terms not found in the NT / BDAG (5,000 words) and some words that are found in BDAG, but that have distinct LXX usages (1,000 words).

"Throughout his preface and introduction, Chamberlain exhibits concern that the reader recognizes the commonality of LXX vocabulary throughout the ancient world. He also repeatedly voices his interest in the meaning of words "to a non-Jewish Hellenistic reader" (viii, xii-xv), a distinction that may be helpful if it were more fully explained. He also claims an "indisputable" conclusion that the LXX "offers no evidence for any Jewish-Greek dialect in Biblical times" (xvii). This statement appears to broach an old debate, but does little to clarify and seems out of place in a lexicon. More appropriate for a lexicon is a clear statement on lexicographical methodology, as one finds in, e.g., Muraoka, but which is absent here. Most of Chamberlain's definitions are translational equivalents or glosses rather than true definitions that are explanatory in nature.

"The lexicon itself is helpfully concise. It provides an English gloss with various notations regarding overlap with Classical usages, the occasional parsing helps, and various other features addressed more fully in the appendices. The first appendix is a set of nine word lists of: (1) "precise parallels"--words in "extrabiblical texts" closely comparable to LXX usages cited in the lexicon; (2) transliterated words; words either (3) unique to the LXX or (4) first occurring in the LXX; (5) words with LXX meanings that have no parallel meaning in "secular" Greek; (6) "stereotypical" terms-words used consistently for a single Hebrew term regardless of semantic range; (7) "mistranslations"; (8) textual variants (based on Rahlfs); and (9) "textual conjectures" --words that suggest an "emendation of MT for the underlying Hebrew" (presumably a different Vorlage).

"The second appendix is a "Comparative Index of Words in This Lexicon and BDAG." Here Chamberlain distinguishes between words covered in BDAG but excluded in his lexicon, words unique to his lexicon not found in BDAG, words treated in BDAG but bearing unique usages in the LXX (and therefore covered in the present lexicon). The third appendix gives a comparison of LXX books with English Bible books with respect to their titles, but also provides a handy chart for where referencing discrepancies exist between the English translations (based on the MT) and LXX.

Chamberlain himself suggests that the chief value of this volume with regard to LXX lexicography is its positing of a taxonomy of categories (xii). This is indeed a helpful step, though his nomenclature and points of delineation require more substantial engagement with current Septuagintal lexicographical discussion. The appendices are welcome reference tools. Yet it remains unclear why one would not simply use a LXX lexicon, such as J. Lust (J. Lust, E. Eynikel, K. Hauspie, A Greek-English Lexicon of the Septuagint, rev. ed. [Deutsche Bibelgesellschaft, 2003]) or T. Muraoka (A Greek English Lexicon of the Septuagint [Lueven: Peeters, 2009]). These remain the indispensable lexicons for the LXX."
--Andrews Seminary Seminary Studies

"This lexicon of the Septuagint is intended as a supplement to BDAG (w. Bauer/F. W. Danker, A Greek-English Lexicon of the New Testament), the standard NT lexicon, much as the standard patristic lexicon (Lampe) is constructed as a supplement to Liddell/Scott/Jones (LSJ), the standard lexicon of classical Greek. Chamberlain prepared it by reading through the Septuagint, comparing the various editions, assessing the variant readings, and working through the standard LXX concordance. After a four-page preface, he presents a nineteen-page introduction in which he treats the character of Septuagint vocabulary, with reference to precise parallels, transliterations, hapax legomena, and so on. Then on pp. 1-185 he provides the lexicon itself, in double-column pages with the Greek word for each entry, a translation, references to its occurrences in the LXX, and other information (occurrences elsewhere, grammatical analysis, etc.). There are three appendixes: word lists; a comparative index of words in this lexicon and BDAG; and Septuagint-English Bible parallels."
--New Testament Abstracts

Lexicon of the New Testament, 3d ed. (Chicago: University of Chicago Press, 2000), henceforth BDAG. The treatment in BDAG is supplemented when the LXX has additional meanings. New lexical articles are composed when the LXX word is not in BDAG at all. However, there is no treatment of the most common words, the range of meanings of which does not differ from that in BDAG. It is assumed that the reader has sufficient command of ancient Greek. An underlying thesis of the work is that the LXX is no special "Jewish-Greek." The author states the distinctive contribution of this lexicon as follows: it is "the first systematic attempt to acknowledge every word or use that conforms to ordinary expectations for fundamental/ classical or KoinÓ Greek on the one hand and, on the other hand, to account for all the instances in which 'in manifold and diverse ways' the LXX vocabulary confronts us with unprecedented challenges" (p. xii)."
--The Bible Today

▼▲
I'm the author/artist and I want to review The Greek of the Septuagint: A Supplemental Lexicon.
Back
Back