Skip to main content
SPRING CYBER EVENT STARTS NOW: And it's a really BIG deal! Up to 88% off through 5/24>
The Gospel according to John: A Theological Commentary [ECBC]
By: Herman Ridderbos
Stock No: WW875953 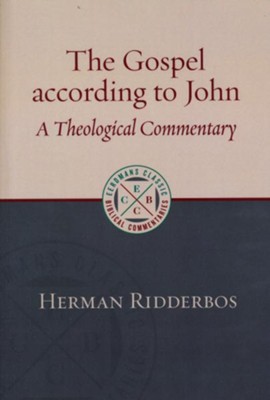 The Gospel according to John: A Theological Commentary [ECBC]

In this commentary on John—originally published in Dutch in 1987 and translated into English a decade later—Herman Ridderbos engages the host of twentieth-century interpretations while also developing his own integral understanding of John in which the Gospel emerges as a profoundly theological work.

Beginning with a theological introduction on "the peculiar character of the Fourth Gospel," Ridderbos uses verse-by-verse exposition to unpack John’s distinctive apostolic character, offering expert literary and homiletical exegesis of the Fourth Gospel "as the Christian church adopted it."

The Eerdmans Classic Biblical Commentaries series collects the best and most trusted Eerdmans commentaries from years gone by in a format that will make them available to readers for years to come. Some of the ECBC volumes were originally published in major commentary series, others more recently. Though written over the years for various levels of readers, the Eerdmans Classic Biblical Commentaries all have this in common: pastors, scholars, and serious students of the Bible continue to read them, study them, and rely on them to help unlock the meaning and message of the Scriptures.

▼▲
Herman Ridderbos (1909–2007) was professor of New Testament at the Theological School of the Reformed Churches of the Netherlands in Kampen.

▼▲
— Interpretation
"A rich resource for any preacher or student. . . . Ridderbos effectively displays the historical and conceptual coherence of the Gospel of John."

— Journal of the Evangelical Theological Society
Ridderbos’s commentary reflects balanced scholarship that endeavors to come to grips with what John was trying to say in his portrayal of Jesus. . . . A splendid example of theological analysis without postulatingredactional layers and a significant addition to works on John."

▼▲
I'm the author/artist and I want to review The Gospel according to John: A Theological Commentary [ECBC].
Back
Back