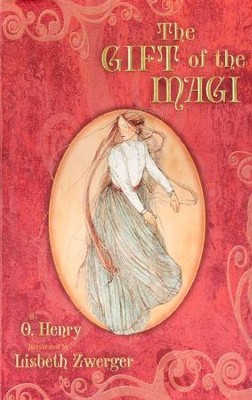 The Gift of the Magi

▼▲
One dollar and eight-seven cents is all the money Della has in the world to buy her beloved husband a Christmas present. She has nothing to sell except her only treasure--her long, beautiful brown hair. Set in New York at the turn of the twentieth century, this classic piece of American literature tells the story of a young couple and the sacrifices each must make to buy the other a gift. Beautiful, delicate watercolors by award-winning illustrator Lisbeth Zwerger add new poignancy and charm to this simple tale about the rewards of unselfish love. Recommended for ages 6 to 9.

One dollar and eighty-seven cents is all the money Della has in the world to buy her beloved husband a Christmas present. But all she has left to sell is her one greatest treasure—her long, beautiful brown hair. A simple tale about the rewards of unselfish love.

▼▲
William Sydney Porter—later to be known as O. Henry—was born in North Carolina in 1862. Known for his surprise endings and ability to capture the hope and pathos of ordinary people, Henry is best remembered for his stories about New York City. The Gift of the Magi was written in 1906, four years before his death.

Lisbeth Zwerger has been accorded nearly every prize that can be given, including the highest international award for lifetime achievement, the Hans Christian Andersen Medal. Since 1981 she has devoted her extraordinary talents to children’s literature, to stories as charming and picturesque as her native Vienna. Always surprising, always engaging, her artwork combines technical mastery with an insight and gentleness so rare and captivating that she has been correctly called one of the finest illustrators of the twentieth century.

-- Publishers Weekly
"Lisbeth Zwerger's biting line and soft, evocative palette illuminate the characters with an aura of gaslit nobility, and burnish an antique until it shines."

▼▲
I'm the author/artist and I want to review The Gift of the Magi.
Back
Back