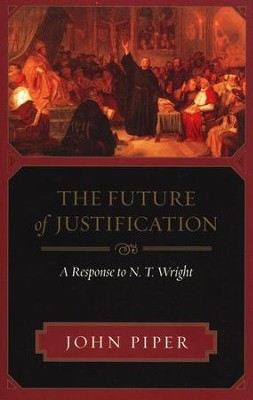 The Future of Justification: A Response to N.T. Wright

▼▲
N. T. Wright, a world-renowned New Testament scholar and bishop in the Church of England, has spent years seeking "new" interpretations of the apostle Paul's writings. Among his conclusions are that "the discussions of justification in much of the history of the church certainly since Augustine got off on the wrong foot, at least in terms of understanding Paul and they have stayed there ever since."

Accordint to Piper, Wright's confidence that the church has gotten it wrong for 1,500 years, given his enormous influence, set off warning bells for Christian leaders such as himself, a pastor and New Testament scholar. According to Piper, if Wright's views find a home in the church, not only could the doctrine of justification be distorted for generations to come but the New Testament writers' original intent could be silenced. This book is a call from John Piper to all Christians, citing his warnings against "fresh" interpretations of the Bible and his plea to hold fast to what he considers the biblical view of justification.

Pastor John Piper thoroughly analyzes the teachings of Bishop N. T. Wright on the topic of justification and sounds a call to discernment for the entire church.

▼▲
I'm the author/artist and I want to review The Future of Justification: A Response to N.T. Wright.
Back
×
Back
×