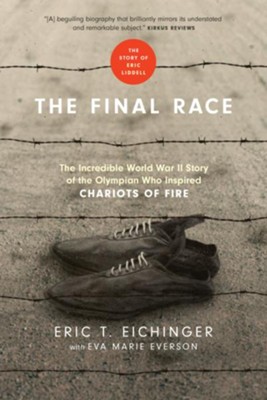 ▼▲
The story of the Olympic gold-medal sprinter who became a missionary to China and died in a Japanese internment camp. "The authors' admiration for, and fascination with, Liddell is palpable on every page, demonstrated by the depth of research and the care taken to preserve his legacy. Modest, beguiling,"---Kirkus. 304 pages, softcover.

▼▲
An award-winning biography of a man whose faith and resilience continues to inspire.
On July 19, 1924, Eric Liddell was on top of the world. He was the most famous Briton at the time, having just won the gold in the Olympic 400-meter race. The story of that raceâ·and the one he didn’t runâ·was told in the popular movie classic Chariots of Fire.

But what most of us don’t know is what became of Eric Liddell in the years after the credits rolled. As the storm clouds of World War II rolled in, Eric had already made decisions in his life that gave him the resilience to stand tall while others fell into despair. His strength of character led him to choose an uncertain future in China during World War II in order to continue helping the Chinese. He lived purposefully even as his world crumbled and he experienced the horror and deprivations of a Japanese internment camp.

The first race you run isn’t your most important one. It’s the final race that matters most.

You won’t want to miss this story of an Olympian who chose the better way.

▼▲
This straightforward, enthusiastic biography by Eichinger and Everson recounts the life story of Eric Liddell, the Olympic athlete whose achievements inspired the iconic movie Chariots of Fire.

The opening sequence of Chariots of Fire—men running barefoot on a Scottish beach backed by a soundtrack scored by Vangelis—is one of the most enduring scenes in cinema. Ironically, the subject of the movie, Eric Liddell, once one of the most famous men in Britain, is perhaps now less well-known than that scene. Eichinger and Everson’s biography seeks to redress this by reilluminating a remarkable life. Liddell was born in China, the second son of Scottish missionaries. At 5, he and his brother Robert were enrolled in a boarding school in London while their parents continued their work in the Far East. From competing as a university freshman and taking a “shocking first in the 100 meters” against Edinburgh’s fastest sprinter to winning gold in the 400 meters at the 1924 Paris Olympics, Liddell led a life of achievement and victory. Yet he is maybe more famous for declining to compete in the 100-meter event of that same Olympics due to his religious respect for the Christian Sabbath. The biography charts his lifelong relationship with God, from his early curiosity with the intersection of science and theology to his work as a missionary in his later years. Short openings to chapters imagine key moments in Liddell’s life: “Eric stretched his legs from the seat he’d nearly collapsed into, one directly opposite the seat his friend slouched on. He glanced out the small window of the train, smudged with a child’s fingerprints from an earlier passage, to the platform on the other side.” These elegantly written passages are elaborated on with factual, to-the-point details: “The physical exertion through sport and competition was a welcome break from his daily pedagogical aerobics. Simply put, running gave his mind a rest.” The biography is occasionally oversentimental; Duncan Hamilton’s For the Glory: Eric Liddell’s Journey from Olympic Champion to Modern Martyr suffers the same pitfall. The authors’ admiration for, and fascination with, Liddell, however, is palpable on every page, demonstrated by the depth of research and the care taken to preserve his legacy.

A modest, beguiling biography that brilliantly mirrors its understated and remarkable subject.

▼▲
I'm the author/artist and I want to review The Final Race.
Back
×