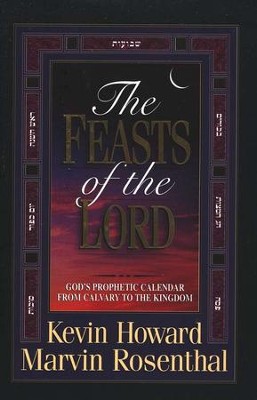 The Feasts of the Lord

▼▲
Written with Christian and Jewish audiences in mind, The Feasts of the Lord takes the reader through all the holy days of Israel. These ancient celebrations come alive as they are enhanced with over one hundred and fifty full-color charts, photographs and paintings. As the history of the Judean holy days is revealed, the Jewish customs that serve as the most foundational facts of Christianity are brought to light. As Rosenthal and Howard strive to create a fresh understanding, these traditions are weighed in the light of God's Word to reveal the Messiah, Jesus of Nazareth.

Kevin Howard is an ordained minister with unique insight into Jewish culture and the Hebrew language as a result of his involvement in the synagogue, the Jewish community, and his trips to Israel. He spent six years as an administrator and Bible teacher with The Friends of Israel Gospel Ministry, Inc, a world-wide missionary organization to the Jewish people.

Marvin Rosenthal was born and raised in a conservative Jewish home and then became a Christian as a teenage by following the godly example of his mother. He served in the pastorate for six years, before serving The Friends of Israel Gospel Ministry, Inc. as a director for sixteen years.

Isreal's feasts are infinitely more important than just a series of cultural observances. These feasts are appointed by the Lord, and they are owned by the Lord. Together they form God's prophetic calendar, outlining the work of history's most important person...Jesus, the Messiah. As such, few themes are more timely or rewarding for God's people today.

The Feasts of the Lord covers all aspects of the biblical feasts, including:

Yet, this book is not just another reference book on the feasts. It is written from the Hebrew Christian viewpoint, helping you to see the feasts through Jewish eyes.

The words of the Savior, His messianic claims, and Bible prophecy will all take on a rich, new relevance for you against the exciting backdrop of The Feasts of the Lord.

▼▲
I'm the author/artist and I want to review The Feasts of the Lord.
Back
Back