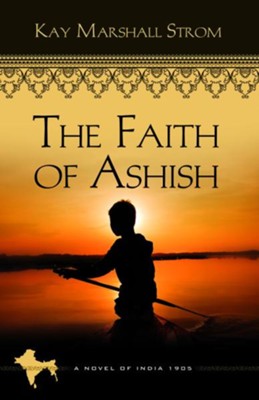 ▼▲
Virat and Latha named their son Ashish, for he is the light and glory of their world. Yet a simple drink of water changes all their lives forever. For Virat, Latha, and Ashish are Untouchables, members of a caste who must never contaminate the world of the other, higher, castes.

When Ashish mistakenly drinks from the wrong cup, he's badly beaten. Knowing that his son needs a doctor-which takes money-Virat ventures into the dangerous realm of the high caste. He begs Mammen Samuel Varghese, the wealthy landowner and Christian, for money. He receives the loan-along with a life of slavery for himself and his family.

But Mammen Samuel does not understand the strength of a father's love, the power of a young British nurse who could not forget a boy named Blessing-or the faith of a child.

▼▲
“His name is Ashish. His name is Blessing. The boy is my blessing.” Virat and Latha named their son Ashish, for he is the light and glory of their world. Yet a simple drink of water from the wrong cup changes them forever. Virat, Latha, and Ashish are Untouchables in 1905 India, members of a caste who must never contaminate the world of the other, higher, castes.
When Ashish is in desperate need of a doctor, Virat risks everything to save his son and ventures into the dangerous realm of the high caste. There, the strength of a father’s love, the power of a young British nurse, and the faith of a child change the lives around them.

"Kay Strom has penned a high-powered suspense novel using her extensive overseas research and her experiences in third world countries. A master in creating the unexpected." - DiAnn Mills, Christy Award winner and author of Pursuit of Justice, The Fire in Ember, and Under a Desert Sky

"Author Kay Marshall Strom, in her professional yet heart-rending style, has penned another story that will open the eyes and change the lives of her readers. This is an exquisitely written tale of hope and faith in the midst of difficulties born out of superstition and bondage. I am already anxiously awaiting the sequel!"-  Kathi Macias, award-winning author of more than 30 books, including the popular Extreme Devotion series
"Do not miss this historical, inspirational novel by Kay Marshall Strom. It will touch your heart." - FreshFiction.com

▼▲
In Kay Marshall Strom's The Faith of Ashish, the first book in the new Blessings in India series, Indian outcasts Virat and Latha unwittingly sell themselves and their son Ashish, whose name means blessing, into slavery in order to save Ashish's life. Suddenly thrust into a mixture of castes in the Hindu culture and forced to work in the fields, this Untouchable family lives in fear of the gods and the landlord, the "Christian" Mammen Samuel Varghese. The family members must also struggle to remain alive and together as well as to retain hope, learning more about the true God as they reach out in faith. Ashish in particular must choose whether to continue to suffer with his family or to seek a better life under the care of Abigail Davidson, an English woman who helps run a nearby Christian clinic.

The book is told from several different points of view, switching mainly among Ashish, his parents, Mammen Samuel, and Abigail Davidson, with a different focus for each section of the novel. Though at times scene transitions seem a bit rough, it is easy to understand the characters and their personalities, as well as the constraints of the religions they follow. The lives of the women especially are described in horrifying detail, including a scene in which a mother kills herself in her own burning house after her husband has sold their daughter to a brothel.

The characters are vivid, and a few, chiefly Ashish and his family, show marked growth in the book, though Strom is careful to sustain reality. She is not afraid to showcase seemingly hopeless situations and harsh truth, but she is still able to incorporate a kernel of hope that can only come through the work of God. Psalm 23 is a perfect reflection of this. The only dissatisfaction I felt with this book was the abrupt ending. I felt as if a few chapters were ripped out; there was no clear resolution, and I did not know I was at the end until I had nearly finished the last page. It doesn't end, it just stops.

The Faith of Ashish is valuable for anyone who can persevere with characters through harsh trials, who may be considering entering into missions, or who is interested in the workings of another religion in a historical context. I recommend reading it, though I await the sequel, which hopefully will bring a more satisfying resolution and conclusion.  Katherine Sozansky, www.ChristianBookPreviews.com

▼▲
I'm the author/artist and I want to review The Faith of Ashish (Book 1 of Blessings of India Series) - eBook.
Back
Back