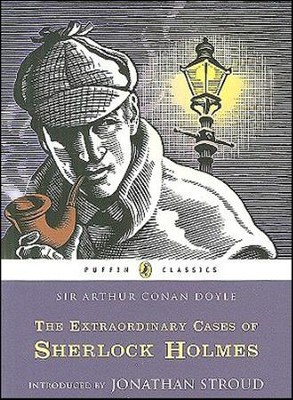 The Extraordinary Cases of Sherlock Holmes

▼▲
Through the foggy streets of Victorian London to the deepest countryside, Sherlock Holmes uses his unique powers of deduction in eight thrilling investigations, including the mysteries of 'The Speckled Band' and 'The Reigate Puzzle'. With a captivating introduction by award-winning Jonathan Stroud.

▼▲
Sir Arthur Conan Doyle was born in Edinburgh in 1859. After nine years in Jesuit schools, he went to Edinburgh University, receiving a degree in medicine in 1881. He then became an eye specialist in Southsea, with a distressing lack of success. Hoping to augment his income, he wrote his first story, A Study in Scarlet. His detective, Sherlock Holmes, was modeled in part after Dr. Joseph Bell of the Edinburgh Infirmary, a man with spectacular powers of observation, analysis, and inference. Conan Doyle may have been influenced also by his admiration for the neat plots of Gaboriau and for Poe’s detective, M. Dupin. After several rejections, the story was sold to a British publisher for &pound;25, and thus was born the world’s best-known and most-loved fictional detective. Fifty-nine more Sherlock Holmes adventures followed. Once, wearying of Holmes, his creator killed him off, but was forced by popular demand to resurrect him. Sir Arthur—he had been knighted for this defense of the British cause in his The Great Boer War—became an ardent Spiritualist after the death of his son Kingsley, who had been wounded at the Somme in World War I. Sir Arthur Conan Doyle died in Sussex in 1930.

▼▲
I'm the author/artist and I want to review The Extraordinary Cases of Sherlock Holmes.
Back