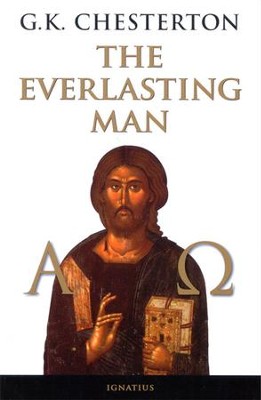 ▼▲
Considered by many to be Chesterton's greatest masterpiece of all his writings, this is his whole view of world history as informed by the Incarnation. Beginning with the origin of man and the various religious attitudes throughout history, Chesterton shows how the fulfillment of all of man's desires takes place in the person of Christ and in Christ's Church. Chesterton propounds the thesis that "those who say that Christ stands side by side with similar myths, and his religion side by side with similar relgions, are only repeating a very stale formula contradicted by a very striking fact." And with all the brilliance and devastatinG irony, so characteristic of his best writing, Chesterton gleefully and tempetuously tears to shreds that "very stale formula" and triumphantly proclaims in vivid language the glory and unanswerable logic of that very striking fact. Here is the genius of Chesterton at its delightful best. C.S. Lewis credits this book as the one that was most instrumental in his conversion.

▼▲
I'm the author/artist and I want to review The Everlasting Man [Ignatius Press].
Back
×
Back
×