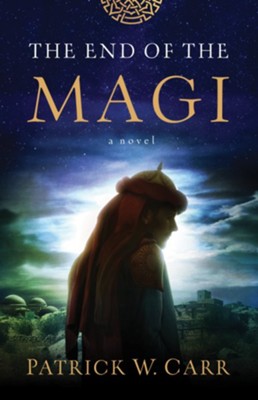 The End of the Magi

▼▲
Following his vision of the coming Messiah, the prophet Daniel establishes a group whose duty is to track the days until the promised arrival. Centuries later, a young magus acolyte flees a death sentence and hides among a traveling caravan. But he cannot forget the awaited star and the assurance that things will never be the same. 384 pages, softcover from Bethany.

▼▲
Following his vision of the coming Messiah, the prophet Daniel creates a select group of men who will count down the calendar to the arrival of Israel's promised king. Centuries later, as the day nears, Myrad, a young magi acolyte, flees for his life when his adoptive father and others are put to death by a ruthless Parthian queen.

Having grabbed only a few possessions, Myrad escapes the city, and searching for a way to hide from the soldiers scouring the trade routes, he tries to join the caravan of the merchant Walagash. The merchant senses that Myrad is hiding secrets, but when the young man proves himself a valuable traveler, an epic journey filled with peril, close escapes, and dangerous battles begins.

With every day that passes, the calendar creeps closer to the coming Messiah. And over everything shines the dream of a star that Myrad can't forget and the promise that the world will never be the same.

▼▲
Patrick W. Carr is the author of the acclaimed fantasy series The Darkwater Saga and The Staff and the Sword. A Cast of Stones won the 2014 Carol Award for Speculative Fiction and the 2014 Clive Staples Award. The Shock of Night won the 2016 INSPY Award for Speculative Fiction. Patrick teaches high school math and makes his home in Nashville, Tennessee, with his wife, Mary, and their four sons. Learn more at www.patrickwcarr.com.

▼▲
I'm the author/artist and I want to review The End of the Magi.
Back
Back