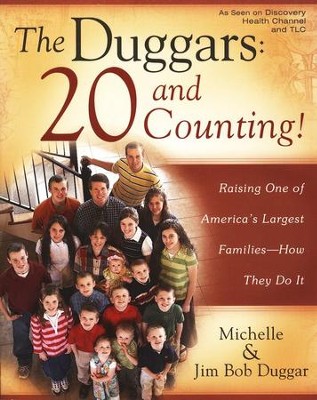 The Duggars: 20 and Counting!

▼▲
Take a close inside look at the supersize Duggar family (18 children plus parents)! Since their first documentary on the Discovery Health Network, viewers have been fascinated with the story of this couple's faith and belief that children are a blessing from God. Their first book, The Duggars: 20 and Counting, is an inspiring and entertaining collection of stories, photos, recipes, tips, traditions, and practical ideas designed to answer the questions of the curious. Some of the questions they answer are "Why do you have so many children?", "How do you provide for your family financially?", "How do you handle mealtimes...transportation... laundry...birthdays?", "How are your children so well behaved?", and "Why do all your children have names that begin with J?". Adopt a few ideas from the Duggars and improve the peace and love inside the walls of your own home. Paperback.

▼▲
This practical, positive book reveals the many parenting strategies that Jim Bob and Michelle Duggar use as they preside over America’s best-known mega-family.

Each time a new baby arrives, the press from around the world clamors for interviews and information. Visitors are amazed to find seventeen (baby number eighteen is due January 1, 2009) well-groomed, well-behaved, well-schooled children in a home that focuses on family, financial responsibility, fun—and must importantly, faith.

Readers will learn about the Duggars’ marriage—how they communicate effectively, make family decisions, and find quality time alone. They’ll discover how the Duggars manage to educate all their children at home, while providing experiences that go beyond the family walls, through vacations and educational trips. And they’ll see how the Duggar family manages their finances and lives debt-free—even when they built their own 7,000-square-foot house.

Answering the oft asked question—How can I do with one or two children what you do with seventeen(soon to be eighteen)?—Jim Bob and Michelle reveal how they create a warm and welcoming home filled with what Michelle calls “serene chaos.” They show how other parents can succeed whether they’re rearing a single child or several. With spiritual insights, experience-based wisdom, practical tips, and plenty of humorous and tender anecdotes, the Duggars answer the questions that pour into the family’s Web site on a daily basis—especially after every national media interview and TV appearance—including their segments on the Discovery Health Channel’s “Meet the Duggars” series.

▼▲
Jim Bob and Michelle Duggar married in 1984. Some time after the birth of their first child, they prayed that God would give them a love for children like his love for children and that he would bless them with as many children as he saw fit in his timing. Soon after, Michelle became pregnant with twins! The Duggars currently have ten boys and nine girls, and all their names begin with “J”—Joshua, Jana and John-David (twins), Jill, Jessa, Jinger, Joseph, Josiah, Joy-Anna, Jedidiah and Jeremiah (twins), Jason, James, Justin, Jackson, Johannah, Jennifer, Jordyn-Grace, and Josie.

▼▲
I'm the author/artist and I want to review The Duggars: 20 and Counting!.
Back
Back