The Door in the Wall
By: Marguerite de Angeli 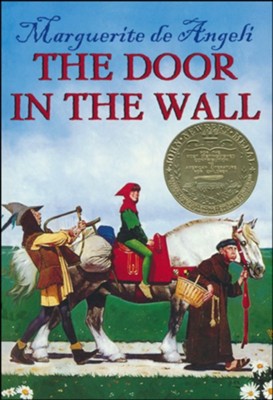 The Door in the Wall

Winner of the Newbery Award, this "enthralling and inspiring tale of triumph. . . . make[s] life in England during the Middle Ages come alive" (The New York Times).

Ever since he can remember, Robin, child of Sir John de Bureford, has been told what is expected of him as the son of a nobleman. He must learn the ways of knighthood. But Robin’s destiny is changed suddenly when he falls ill and loses the use of his legs. Fearing a plague, his servants abandon him, and Robin is left alone.

A monk named Brother Luke rescues Robin and takes him to the hospice of St. Mark’s, where he is taught woodcarving and patience and strength. Says Brother Luke, "Thou hast only to follow the wall far enough and there will be a door in it."

Robin learns soon enough what Brother Luke means. When the great castle of Lindsay is in danger, Robin discovers that there is more than one way to serve his king.

"A poignant story, full of action, and a strongly painted canvas of the times as well." —The New Yorker

▼▲
Marguerite de Angeli was an American writer and illustrator of children’s books, born in Michigan in 1889. An author and illustrator of 28 books, she won the 1950 Newbery Award for her book The Door in the Wall. In addition to her own writing, she illustrated more than three dozen books for other authors. She died in 1987.

▼▲
I'm the author/artist and I want to review The Door in the Wall.
Back
×