Skip to main content
The Domino Effect
By: Davis Bunn
Stock No: WW217913 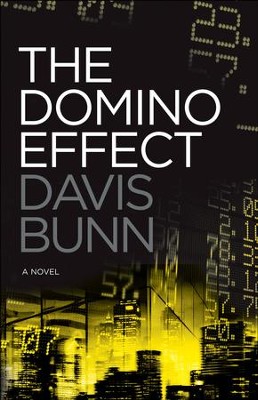 The Domino Effect, by Davis Dunn

Risk analyst Esther Harding has uncovered a conspiracy with the potential to devastate the world's financial markets! But when she sounds the alarm, she wonders if people will believe her. Public support for her ideas grows---but so does the desperation of those whose greed she's trying to expose. Esther knows she must do something---but what?

Esther Larsen, a leading risk analyst at one of the country's largest banking institutions, is becoming more and more convinced that she has uncovered a ticking bomb with the potential to overshadow 2008's market crash. And as her own employer pursues "investment" strategies with ever-increasing levels of risk, she becomes convinced she must do something. Yet what can one person really do?

The markets are edging closer to a tipping point--like the teetering first domino in a standing row that circles the globe. And when Esther does sound the alarm, she wonders if anyone will take her seriously. But as public support grows for her ideas, so does the desperation of those whose conspiracy of greed she seeks to expose. With global markets on the brink, and her own life in danger, Esther is locked in a race with the clock to avert a worldwide financial meltdown.

This fast-paced suspense novel will make you wonder where the fiction ends and reality begins. . . .

Endorsement
"Davis Bunn applies his deft hand to The Domino Effect with the grace and mastery his dedicated fans have come to expect. . . ."--Jerry B. Jenkins

▼▲
Davis Bunn is the author of numerous bestsellers with sales totaling more than seven million copies worldwide. The winner of four Christy Awards for excellence in fiction, he is a Writer-in-Residence at Regent's Park College, University of Oxford. He and his wife, Isabella, divide their time between England and Florida. Learn more at www.davisbunn.com.

▼▲
I'm the author/artist and I want to review The Domino Effect.
Back
Back