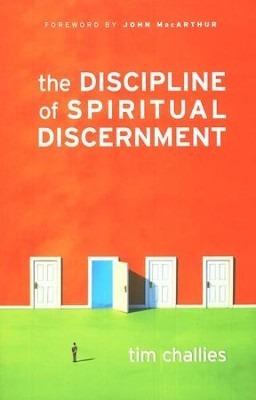 The Discipline of Spiritual Discernment

▼▲
Discernment - we all need it, it is much sought-after, but not many seem to want to go through the steps to get it. Much of the time this is because discernment is misunderstood. In this his first book, Tim Challies grapples with this problem head-on, and simplifies the process for those looking for a clear definition of what biblical discernment truly is.
Beginning with the clear scriptural mandate to be discerning, Challies encourages Christians to focus on what discernment is, what it means to committed Christians, and the consequences of not acquiring a mature ability to discern between right and wrong. In a world where truth is downplayed and ambiguity is embraced, discernment is indispensable to an active and engaged Christian faith.
Challies pulls no punches in outlining this defining characteristic of all mature Christians, giving its biblical basis and reasons for developing it. But he goes further to warn against the abuse or misuse of discernment - speaking the truth without love, elevating disputable doctrine to the level of critical doctrine, assigning guilt (or honor) by association, etc. - as well as giving a practical way to implement discernment. Concise, comprehensive and challenging, The Discipline of Spiritual Discernment will serve as a standard text on this subject for many Christians.

Scriptural principles are practically applied to help Christians not only develop and define day-to-day spiritual discernment but regard it as an essential practice.

Tim Challies (BA, McMaster University) is a self-employed web designer and a pioneer in the Christian blogosphere, having one of the most widely read and recognized Christian blogs, Challies.com. He is also the editor of DiscerningReader.com, a site dedicated to offering thoughtful reviews of books that are of interest to Christians. Tim lives in Oakville, Ontario, with his wife, Aileen, and their three children.

▼▲
I'm the author/artist and I want to review The Discipline of Spiritual Discernment.
Back
Back