Skip to main content
The Diary of a Young Girl: The Definitive Edition
Edited By: Otto H. Frank, Mirjam Pressler
Translated By: Susan Massotty
By: Anne Frank
Stock No: WW80334 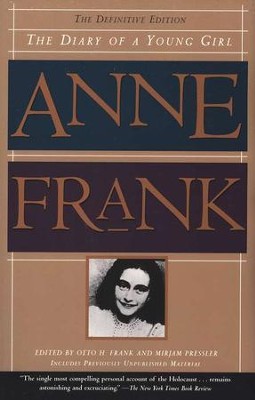 The Diary of a Young Girl: The Definitive Edition

▼▲
This timeless piece of literary documentation, the Diary of Anne Frank, stands as a peerless work of spirit, endurance and human resilience. Read and cherished by millions, it remains one of the most remarkable autobiographies ever written. This edition is comprised of mostly the "b" manuscript that Anne originally edited. 338 pages, softcover.

▼▲
THE DEFINITIVE EDITION &bull; Discovered in the attic in which she spent the last years of her life, Anne Frank’s remarkable diary has since become a world classic—a powerful reminder of the horrors of war and an eloquent testament to the human spirit.

In 1942, with Nazis occupying Holland, a thirteen-year-old Jewish girl and her family fled their home in Amsterdam and went into hiding. For the next two years, until their whereabouts were betrayed to the Gestapo, they and another family lived cloistered in the "Secret Annex" of an old office building. Cut off from the outside world, they faced hunger, boredom, the constant cruelties of living in confined quarters, and the ever-present threat of discovery and death. In her diary Anne Frank recorded vivid impressions of her experiences during this period. By turns thoughtful, moving, and amusing, her account offers a fascinating commentary on human courage and frailty and a compelling self-portrait of a sensitive and spirited young woman whose promise was tragically cut short.

▼▲
This guide is organized to help readers understand and reflect on Anne Frank's diary. Background information, time lines, and the glossary provide historical context for the years of Anne's life and are designed to place her diary within the framework of the events taking place during World War II and the Holocaust. Special details have been included to highlight the twenty-five month period during which Anne and her family hid in the Secret Annex, as well as the aftermath.

The study questions for students are arranged in three parts. The first set of questions relates to facets contributing to Anne's personal identity. The second set of questions examines the relationship of Anne to the world outside the Annex. The final set of questions considers the ongoing issues that Anne raised in her diary over fifty years ago. For additional educational materials, including teacher's notes and activities, please contact the Anne Frank Center USA, 584 Broadway, Suite 408, New York, NY, 10012.

"One of the most moving personal documents to come out of World War II."
—The Philadelphia Inquirer

"The new edition reveals a new depth to Anne’s dreams, irritations, hardship, and passions. . . . There may be no better way to commemorate the fiftieth anniversary of the end of World War II than to reread The Diary of a Young Girl, a testament to an indestructible nobility of spirit in the face of pure evil."
—Chicago Tribune

"The single most compelling personal account of the Holocaust . . . remains astonishing and excruciating."
—The New York Times Book Review

▼▲
I'm the author/artist and I want to review The Diary of a Young Girl: The Definitive Edition.
Back
Back