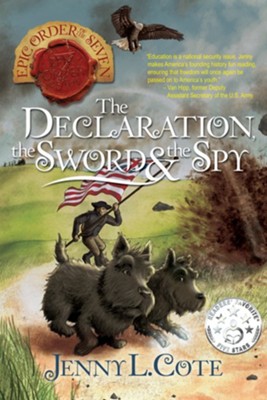 The Declaration, The Sword & The Spy

▼▲
In The Declaration, The Sword & The Spy by Jenny L. Cote, it's March 1775, and Patrick Henry's cry of 'Liberty or Death!' has declared that war is coming. The Voice of the Revolution says that the time for pleading with King George III and Parliament is over---the colonies must prepare to fight, but they will not fight their battles alone. France must secretly enter the cause of American Independence, but it will take the best spies operating on both sides of the Atlantic to pull this off.

While the Sons of Liberty secretly plan, a spy in their midst threatens to crush the patriots before they can arm. Paul Revere's heart-pounding midnight ride soon announces that British regulars are marching from Boston to Concord, but who will fire the first shot at Lexington and launch the American Revolution? As that shot is heard around the world, France's young Marquis de Lafayette immediately commits his sword to fight for American independence, but King Louis XVI has other plans for the reluctant courtier. Patrick Henry picks up his gun but is quickly branded an outlaw by Lord Dunmore and must avoid capture on his way to the Second Continental Congress where George Washington becomes the Sword of the Revolution: Commander-in-Chief of the Continental Army.

After the bloody Battle of Bunker Hill, Washington faces the impossible task of forming and supplying an undisciplined, rag-tag army to fight the mightiest army on earth. It will take young bookseller Henry Knox to bring him a noble train of artillery from Fort Ticonderoga to drive the British from Boston. But while the cannons boom, the Voice of the Revolution is needed once more---this time for a resolution to declare independence. The Enemy seeks to crush the patriots and their commander on the field, but which will be the most dangerous---the enemy without or the enemy within? Recommended for ages 8 to 12 years.

▼▲
Award-winning author and speaker Jenny L. Cote, who developed an early passion for God, history, and young people, beautifully blends these three passions in her two fantasy fiction series, The Amazing Tales of Max and Liz® and Epic Order of the Seven®. Likened to C. S. Lewis by readers and book reviewers alike, she speaks on creative writing to schools, homeschools, universities and conferences around the world.  Jenny has a passion for making history fun for kids of all ages, instilling in them a desire to discover their part in HIStory. Her love for research has taken her to most Revolutionary sites in the U.S., to London (with unprecedented access to Handel House Museum to write in Handel’s composing room), Oxford (to stay in the home of C. S. Lewis, ’the Kilns’, and interview Lewis’ secretary, Walter Hooper at the Inklings’ famed The Eagle and Child Pub), Paris, Normandy, Rome, Israel, and Egypt. She partnered with the National Park Service to produce Epic Patriot Camp, a summer writing camp at Revolutionary parks to excite kids about history, research and writing. Jenny has been featured by FOX NEWS on Fox & Friends and local Fox Affiliates, as well as numerous Op-Ed pieces on FoxNews.com. She has also been interviewed by nationally syndicated radio and print media, as well as international publications.  Jenny holds two marketing degrees from the University of Georgia and Georgia State University. A Virginia native, Jenny now lives with her family in Roswell, Georgia. In addition to researching and writing future books in her series, Jenny produced the audio version of The Ark, the Reed, and the Fire Cloud, a VBS Curriculum based on her books, Heroes of HIStory.

▼▲
I'm the author/artist and I want to review The Declaration, The Sword & The Spy.
Back
Back