Skip to main content
BLACK FRIDAY: Thousands of Deals ~ Up to 85% Off Through 11/28. Shop Now >
The Daring Adventures of Penhaligon Brush - eBook
By: Sally Jones Rogan
Stock No: WW12017EB 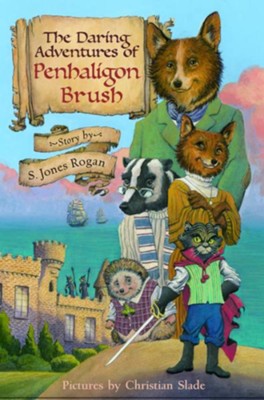 ▼▲
PENHALIGON BRUSH LONGS for adventure and finds it aplenty in the seaside village of Porthleven. Within hours of his arrival, he is captured by armed ferrets and thrown into the dungeon of Furball Manor. Happily, he is rescued by friends. Unhappily, they explain that the dastardly wildcat, Sir Derek, and his ferret army plan to sink the ships of the princess of Spatavia that very night! Can Penhaligon and his unlikely band of resistors save the princess? Of course they can!

This is an old-fashioned adventure story, told with great verve and a fresh wit. Filled with more than 50 black and white illustrations, it's a perfect book to entice newly independent readers.

▼▲
S. Jones Rogan traveled the world in search of adventure, then settled down in Los Angeles, California, where she works as a school librarian.

Christian Slade is an illustrator best known for his portraits of corgis. He lives in Orlando, Florida.

▼▲
Set in the days of olde, this swift-paced, large-scale adventure centers on Penhaligon, an earnest fox, who takes on the scheming feline Sir Derek and his army of ferrets in a eerie seaside village. The nefarious Derek plots to shipwreck vessels carrying the soon-to-be bride of the crown prince and then plunder the ships' bounty-and Penhaligon is tapped to thwart him. Rogan, who grew up in Wales and now works as a school librarian in Los Angeles, adds suspense and humor to virtually every turn of the curlicue plot. Other developments include a love interest for Penhaligon in the form of a saucy vixen; a duel (after Derek's blade slashes the fox's clothing, the villain says, "You'll pay for your meddling," to which Penhaligon replies, "And you'll pay for this waistcoat") and, of course, numerous reversals of fortune. Slade's halftone art, sometimes presented in conventional one-page scenes but often laid out in dynamic interaction with the text, represent these robust characters in theatrical costume and with plenty of personality. Ages 8-12. (Sept.) Copyright 2007 Reed Business Information.

▼▲
I'm the author/artist and I want to review The Daring Adventures of Penhaligon Brush - eBook.
Back
Back