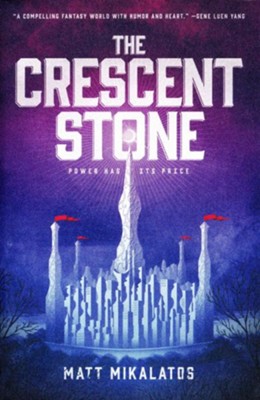 ▼▲
In The Crescent Stone by Matt Mikalatos, Madeline, a teenager with terminal lung disease, meets a mysterious stranger who offers to heal her in exchange for one year of service in his world, the Sunlit Lands. Madeline and her friend Jason travel to the Sunlit Lands to work for the Elenil people. There is much to discover and enjoy as privileged members of the fantastical Elenil society, but Madeline and Jason soon learn that magic must be bought at a high price.

▼▲
“For Narnia fans who enjoy heavy snark, this is a must-read.” —Kirkus Reviews

“With the rich characterization of John Green and the magical escapism of Narnia, this book is a must read for all fantasy fans!” —Lorie Langdon, author of Olivia Twist and the Doon series

Madeline Oliver has never wanted for anything, but now she would give anything just to breathe. Jason Wu skates through life on jokes, but when a tragedy leaves him guilt-stricken, he promises to tell only the truth, no matter the price. When a mysterious stranger named Hanali appears to Madeline and offers to heal her in exchange for one year of service to his people, Madeline and Jason are swept into a strange land where they don’t know the rules and where their decisions carry consequences that reach farther than they could ever guess.

▼▲
A terminally-ill girl is lured into a fantasy world with a chance at a cure, but magic has a price. High school senior Madeline, struggling with a deadly lung disease, eagerly exchanges a year of service with the Elenil for her health. Meanwhile, her skeptical friend Jason Wu, worried for her safety, follows along and trades a year of his life for a pudding cup each day for the rest of his life. They find themselves in a world where young humans are recruited to serve and fight in wars against the Scim. While Madeline delights in her ability to breathe freely in the Sunlit Lands, Jason is busy investigating the rules of magic. The Elenil heal wounds, have magical toilets, and give him a war beast whom he names Delightful Glitter Lady. It is too good to be true—until you ask, where does all the poop go? And who accepts the wounds when these young soldiers are injured? Although at times heavy-handed with the religious imagery and social messaging, the issues this story brings up are relevant to current discussions about poverty and cultural extinction. Madeline is white and blonde, Jason is Chinese-American, and their culturally diverse friend group in the Sunlit Lands includes an Apsáalooke and a Native Hawaiian boy. For Narnia fans who enjoy heavy snark, this is a must-read.

▼▲
I'm the author/artist and I want to review The Crescent Stone.
Back
Back