In the Company of Secrets, Postcards From Pullman Series #1
By: Judith Miller 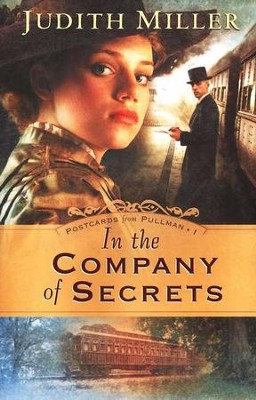 In the Company of Secrets, Postcards From Pullman Series #1

▼▲
Dismissed by the Earl of Lanshire's chef, Olivia Mott leaves England for America with the daughter of her former employer. Finding work as a cook at an elegant hotel in Pullman, Illinois, Olivia weaves a tangled web of deceit. Will she ever admit her past---or continue lying to preserve her new life? 364 pages, softcover from Bethany.

▼▲
The truth could cost her everything....

Now Olivia's position as assistant chef at Pullman's elegant Hotel Florence is dependant upon her keeping her secrets. And sometimes lies have a way of leading to other lies. Should Olivia admit her real past and accept the consequences or keep quiet in order to preserve her comfortable new circumstances?

Deception seems to be part of everyday life in the company town of Pullman, Illinois, where the grand Pullman Palace Car is manufactured. Samuel Howard, Olivia's friend and the town manager, seems to think everything is fine, but Olivia observes something quite different. Could it be that Olivia is not the only one harboring secrets?

▼▲
Judith Miller is an award-winning author whose avid research and love for history are reflected in her bestselling novels. When time permits, Judy enjoys traveling, visiting historical settings, and scrapbooking the photographs from her travel expeditions. She makes her home in Topeka, Kansas.

▼▲
Sir Walter Scott said, O what a tangled web we weave, when first we practice to deceive! Within her book, In the Company of Secrets, Judith Miller constructs this kind of tangled web.
Olivia Mott is a helper in the kitchen of an earl and his wife in London, England. When she is advanced upon by the chef, she decides it is time to leave. The earls daughter has the perfect idea for both of them to escape, but her plan requires many lies.
The two women end up in Pullman, Illinois, and through more lies, Olivia becomes the assistant chef in the local hotels kitchen. Charlotte finds that she is pregnant with an illegitimate child.
The rest of the book follows the exhausting efforts of Olivia to memorize the lies she has told. However, she continually loses ground and soon finds herself even losing the man she loves because of her deceit. In the most unforgettable scene of the book, Fred, who has been courting her, tells Olivia that they must break off their relationship because he could never pursue a woman he doesnt trust.
In the Company of Secrets examines the consequences of sin, especially lying, as well as chronicles the journey of Olivia to faith in Christ. Olivia must constantly battle her feelings of guilt before she will even accept the forgiveness of God; even then, she has a hard time believing that He would want to listen to her prayers. When Olivia does decide to be truthful, she experiences Gods forgiveness while finding that the consequences of her sins cannot be easily escaped.
Although the book does not end with all the loose ends happily tied up, it does leave the reader with a sense that in the end, all will be well. Judith Miller leaves the reader with the promise that God will be faithful as his followers continue to be obedient to him. The book was an excellent challenge to follow the advice of Mark Twain: Always tell the truth. That way, you dont have to remember what you said.  Jenni Ritschard, Christian Book Previews.com

▼▲
I'm the author/artist and I want to review In the Company of Secrets, Postcards From Pullman Series #1.
Back
×
Back
×