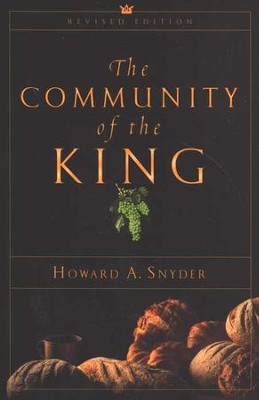 The Community of the King

▼▲
The Church is the Community of the King. What on earth is the kingdom of God? Howard Snyder probes the relationship between the kingdom of God and the church as we know it in our daily life. The church is a part of God's dramatic plan to reconcile all things to himself, "things in heaven and things on earth." The New Testament calls this reconciling work the kingdom of God. Snyder pleads for a model of the church which emphasizes the God-given gifts of all members as he sets forth his theology of the church and gives practical guidelines for those concerned about church life and growth.

▼▲
A classic revisited--revised and expanded. For over twenty-five years, Howard Snyder's Community of the King has set the standard for a penetrating look at the relationship between the kingdom of God and the earthly church. Biblically and practically Snyder helps us think through such crucial questions as Once we grasp the nature of the kingdom, Snyder helps us explore its implications for the church as we experience it in daily life. The church, he argues, is part of God's dramatic plan to reconcile all things to himself. The church that is true to its calling will emphasize the God-given gifts of all its members and develop structures and strategies that reflect God's reign in the world. In addition to a completely new chapter on developments in Christian thinking on the church since its first publication, this new edition of Community of the King contains a fully updated bibliography and is revised throughout. Here is a classic book for all concerned with church life and growth.

▼▲
Howard A. Snyder served as distinguished professor and chair of Wesley Studies at Tyndale Seminary in Toronto, Ontario from 2007 to 2012. Prior to that he was professor of history and theology of mission in the E. Stanley Jones School of World Mission and Evangelism at Asbury Theological Seminary in Wilmore, Kentucky from 1996 to 2006. He has also taught at United Theological Seminary, Dayton, Ohio, and pastored in Chicago and Detroit. He has written numerous books, including (IVP), (IVP) and, most recently (with Joel Scandrett), (Cascade).

▼▲
I'm the author/artist and I want to review The Community of the King.
Back
×
Back
×