The Color of Compromise
By: Jemar Tisby 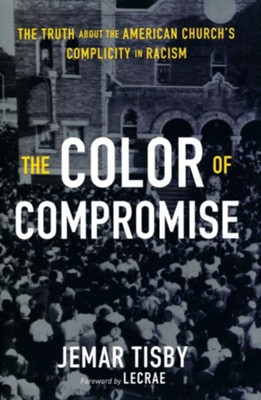 Sample Pages
Out of Stock This product is no longer available and cannot be added to your cart. We apologize for this inconvenience
5 out of 5 stars (18 Reviews)
No longer available.
Stock No: WW597261
Zondervan / 2019 / Hardcover
Call

The Color of Compromise

In August of 1963, Martin Luther King, Jr. delivered his famous "I Have a Dream" speech, calling on all Americans to view others not by the color of their skin but by the content of their character. Yet King included another powerful word, one that is often overlooked. Warning against the "tranquilizing drug of gradualism," King emphasized the fierce urgency of now, the need to resist the status quo and take immediate action.

King's call to action, first issued over fifty years ago, is relevant for the church in America today. Churches remain racially segregated and are largely ineffective in addressing complex racial challenges. In The Color of Compromise, Jemar Tisby takes us back to the root of this injustice in the American church, highlighting the cultural and institutional tables we have to flip in order to bring about progress between black and white people.

Tisby provides a unique survey of American Christianity's racial past, revealing the concrete and chilling ways people of faith have worked against racial justice. Understanding our racial history sets the stage for solutions, but until we understand the depth of the malady we won't fully embrace the aggressive treatment it requires. Given the centuries of Christian compromise with bigotry, believers today must be prepared to tear down old structures and build up new ones. This book provides an in-depth diagnosis for a racially divided American church and suggests ways to foster a more equitable and inclusive environment among God's people.

An acclaimed, timely narrative of how people of faith have historically--up to the present day--worked against racial justice. And a call for urgent action by all Christians today in response.

The Color of Compromise is both enlightening and compelling, telling a history we either ignore or just don't know. Equal parts painful and inspirational, it details how the American church has helped create and maintain racist ideas and practices. You will be guided in thinking through concrete solutions for improved race relations and a racially inclusive church.

The Color of Compromise:

The Color of Compromise is not a call to shame or a platform to blame white evangelical Christians. It is a call from a place of love and desire to fight for a more racially unified church that no longer compromises what the Bible teaches about human dignity and equality. A call that challenges black and white Christians alike to standup now and begin implementing the concrete ways Tisby outlines, all for a more equitable and inclusive environment among God's people. Starting today.

Jemar Tisby (BA, University of Notre Dame, MDiv Reformed Theological Seminary) is the president of The Witness: A Black Christian Collective where he writes about race, religion, politics, and culture. He is also cohost of the Pass the Mic podcast. He has spoken nationwide at conferences and his writing has been featured in the Washington Post, CNN, and Vox. Jemar is a PhD candidate in history at the University of Mississippi studying race, religion, and social movements in the twentieth century.

▼▲
I'm the author/artist and I want to review The Color of Compromise.
Back
×
Back
×