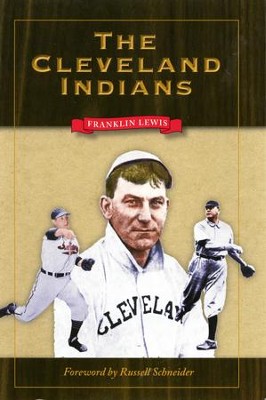 First published by G. P. Putnam’s Sons in 1949, Franklin “Whitey” Lewis’s The Cleveland Indians begins with the organization’s early years as the Cleveland Forest Citys, covers the 1920 World Series victory over the Brooklyn Dodgers, and concludes with the excitement of the 1948 pennant race.

This early team history covers such Cleveland legends as Cy Young, from his days in Tuscarawas County and Canton and his time with the Cleveland Spiders; Bob Feller, his discovery and development; and Larry Doby, the second African American to play in the major leagues and the first to play in the American League. It also delivers such forgotten and lesser-known stories as professional baseball’s first-ever perfect game, thrown by John Lee Richmond of Worcester against the Cleveland Forest Citys on June 12, 1880; the acquisition of Napoleon Lajoie and the city’s vote to change the team’s name to the Napoleons (Naps) in his honor; and Charles W. Somers and John F. Kilfoyl and the birth of the American League.

▼▲
Franklin “Whitey” Lewis started at the Cleveland Press in 1929 as the boxing writer and soon became the assistant sports editor. He left to become a radio sportscaster but returned to the Press in 1939 as its sports columnist, holding that position until his death in 1958. Russell Schneider was a sportswriter and columnist for the Cleveland Plain Dealer for 32 years. He is the author of The Cleveland Indians Encyclopedia.

▼▲
I'm the author/artist and I want to review The Cleveland Indians / Digital original - eBook.
Back
×
Back
×