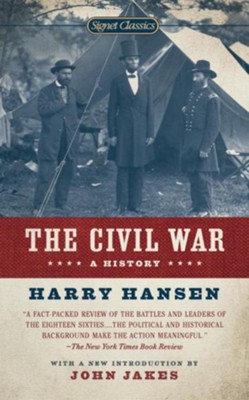 The Civil War: A History

▼▲
Presented in one comprehensive volume, this is the Civil War as it really was-the forces and events that caused it, the soldiers and civilians who fought it, and the ideas and values that are its legacy today.

▼▲
Harry Hansen was born in Davenport, Iowa, and received a bachelor of philosophy degree from the University of Chicago. He served as a war correspondent for the Chicago Daily News during World War I, and was a correspondent at the Paris Peace Conference in 1919. Mr. Hansen served as literary editor of the Chicago Daily News, the New York World, and the New York World Telegram. He wrote eleven books as well as numerous articles and essays, and lectured at Columbia University and the University of Chicago. A member of the Society of American Historians, he was the editor of The World Almanac.

▼▲
I'm the author/artist and I want to review The Civil War: A History.
Back
×