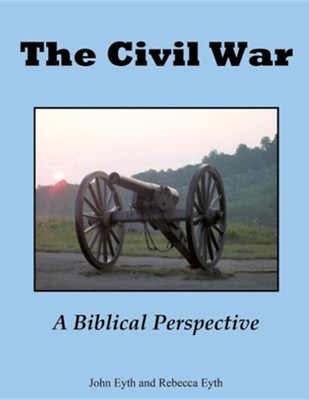 The Civil War - A Biblical Perspective

▼▲
The Civil War - A Biblical Perspective Why was the Civil War fought? What was God's purpose in allowing the War? The American Civil War is one of the most written about topics in American history; however, most authors fail to relate the reason why the war was fought and God's purposes during this time. In this book, we outline the cause of the War from source documents of the men who lived during this time and made the decisions which led to the conflict. The unique aspect of this book is utilizing the truth of God's Word to shed light on the reason why the War was fought and God's purpose for America by allowing the War. Major battles and personalities, the life of the soldier and many other fascinating aspects of the Civil War will be covered in this book. You will see the hand of God as He worked His purposes in America during the greatest fiery trial in United States history. John Eyth, CPA, CMA, CFM is a financial executive. His experience includes for profit and non-profit organizations. He has studied the Bible and Civil War history for over thirty years. Rebecca Eyth is a college student pursuing a double major in History and English. While in high school, she was a nationally ranked, award winning public speaker. She has studied the Bible for over twelve years and Civil War history for over nine years. This father-daughter writing team uses their analytical, investigative and critical thinking skills, as applied to historical evidence, to draw valid conclusions of Civil War history from a Biblical worldview. John and his wife Antionette, along with their daughters Rebecca and Hannah, live in Pennsylvania. The Eyth family has visited eighty-eight Civil War related sites, including thirty-two Civil War battlefields.

▼▲
I'm the author/artist and I want to review The Civil War - A Biblical Perspective.
Back
×