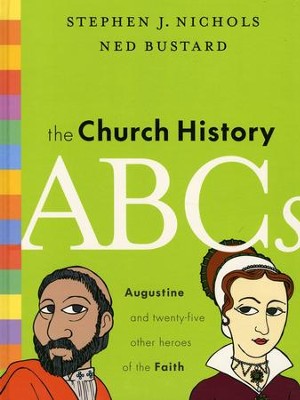 ▼▲
A brilliant way to integrate church history into your children's understanding from their youth! In the familiar A is for apple format, here each initial provides the opportunity to dive into a short biographical paragraph on 26 famous men and women in church history; A for Saint Augustine, B for Anne Bradstreet, C for John Calvin. Photos of historic portraits, artifacts, and first-letter-related items provide additional visual interest. This wide range of characters reflects the breadth of church history and reminds children that these great figures were once living, breathing people who lived and died for the glory of God. 34 pages, hardcover.

This book follows the alphabet as it introduces parents and children to twenty-six pillars of the Christian faith. Whimsical, full-color illustrations and engaging prose teach church history in a fun and creative way.

Stephen J. Nichols (PhD, Westminster Theological Seminary) serves as the president of Reformation Bible College and chief academic officer of Ligonier Ministries. He has written over twenty books and is an editor of the Theologians on the Christian Life series. He also hosts the weekly podcast 5 Minutes in Church History.

Ned Bustard (BA, Millersville University) is a graphic designer, author, illustrator, art gallery director, and printmaker. He owns the design firm World's End Images, and is also the creative director for Square Halo Books, Inc. He is the designer for Christians in the Visual Arts. Ned and his wife, Leslie, have three daughters.

▼▲
The Church History ABCs may be represented as juvenile literature, but do not be fooled. This is one of those wonderful books that doesnt fit any genre and is for all ages. You will laugh, become engrossed, long to know more and head for your computer to do research, wonder at the intricacy and humor of the illustrations, and wish the sequel was all ready published. Yes, The Church History ABCs does start with the well-know Augustine  not designated a saint, and sitting on a pear (turn to the additional information at the back of the book for further explanations of such things as Augustine and his pear). It then goes on to tell of several well-known Christian historical characters, each with his or her conundrum illustration, such as John Newton, Patrick (again, no saint), and the Wesleys. There are also several not-so-well-known ones, such as one of my favorite historical Christians, Queen Jeanne of Navarre, who bravely worked for the Reformation; and Zacharius Ursinus, a 16th century God-led genius and scholar. Because it is presented in alphabet format, there are twenty-six in all.

Christian research professor and prolific author Stephen Nichols presents The Church History ABCs as an intriguing almanac, using love of subject, scholarship, and a happy sense of humor. In the few interesting words he allots to each person, Nichols portrays personality, just enough information to whet your curiosity, and joy in being a Christian brother to such folk. His Introduction states, In fact, this story hasnt even ended yet. Someday you will be adding your own story to it (p. 4). Graphic artist and childrens book illustrator Ned Bustard combines many items, including photos, maps, and music, with his wide-eyed portraiture to give his modern, steeped-in-history graphics a storytelling life of their own. How many uses can one book have? This one has several: family-time reading, leading into devotions; interest catching reader for elementary students; picture book to be read to savvy non-readers; home-schooling text; Christian school library volume (or any library, for that matter); and, reference book for group devotions, sermons, students, and those others who just cant get enough learning.

Buy this book! You will love it! -- Donna Eggett, www.ChristianBookPreviews.com

▼▲
I'm the author/artist and I want to review The Church History ABCs.
Back
Back