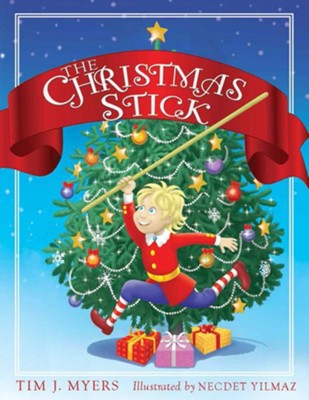 ▼▲
The Christmas Stick: A Christmas Story by Tim J. Myers, and illustrator, Necdet Yilmaz, tells the Christmas story of a young prince that learns about stubbornness and taking , but eventually also a change of heart and giving. In a faraway kingdom, it is Christmas Eve and the royaly family is gathered to open presents---which mainly meant watching the prince open his. The prince doesn't realize that he is bored with all the incredible gifts he's received, and carries a deep sadness that he doesn't recognize. It was his wise grandmother who understood that he really needs.a stick. This simple gift opens the prince up to precious things. Readers will discover the power of imagination, the pleasure of doing, and eventually the gift of loving and being loved. Paperback, 32 pages.

▼▲
One Christmas Eve in a far kingdom, the royal family gathered to open presents—which mainly meant watching the prince open his...  So begins a children's story about taking, but also giving—about stubbornness, but also a change of heart. The spoiled prince doesn't realize that he's actually bored with all the magnificent gifts he’s given. And he carries a deeper sadness, one that would stay locked away, a secret even from him, if his wise grandmother hadn’t understood that what he really needed was...a stick. It was sturdy, and as long as he was tall. But it was just a stick. And yet this simple gift opens the prince to precious things. This children's picture book explores the power of imagination, the pleasure of doing, and eventually, the heart-soothing, joy-inducing warmth of not only being loved—but loving.

▼▲
Tim J. Myers is a writer, songwriter, storyteller, and university lecturer. He’s been nominated for two Pushcarts, won a poetry contest judged by John Updike, and is the author of a dozen children's books.  His Basho and the Fox was a New York Times Children’s Bestseller and was read aloud on NPR. www.TimMyersStorySong.com.
Necdet Yilmaz was born and raised in Istanbul, where he attended Marmara University School of Fine Arts and Design. He has illustrated dozens of books for children and lives in New York.

▼▲
The Christmas Stick by Tim J. Myers (illustrated by Necdet Yilmaz) is a ’Christmas’ story, but it isn’t a peculiarly ’Christian’ story. Any child and family that enjoys this season will be able to latch onto the books central themes. It is a tale which illustrates the joy of giving and the power of imagination.
This is a simple story that all three of my kids enjoyed. It speaks of the power of giving, gratitude and imagination. Kind of a fun little picture book. They liked words and pictures. My daughter’s one objection is that the stick the prince gives to his grandmother, is not pictured as long as his grandmother is tall, as the words suggest. But generally the illustrations complimented the words well.  The limping grandmother, may have given up her cane to her spoiled grandson. This is never spelled out in the story, but certainly the arc of the story suggests it (this will be lost on most children but says something about ’self-sacrificial giving).
This is a short picture book. I give it four stars and recommend it as an edition to your kid’s Christmas book collection.
—James Matichuk

Every mom knows the experience of having her child unwrap a birthday or Christmas toy, only to find that the child has more fun playing with the box it came in.   It’s a near-universal experience, one that points to a certain truth: Kids need fewer toys than they think they do (or than we think they do).

It’s a tough truth to live by, though, especially this time of year when ads and store windows try to convince our kids that they need more.  That’s why a book like The Christmas Stick (written by Tim J. Myers, illustrated by Necdet Yilmaz) is such a welcome one.
In this colorful new picture book, a spoiled young prince receives a stick for Christmas.  He’s not sure what to do with it at first — it gets ignored as he focuses on the other, flashier toys — but then as the novelty of those toys begins to fade, he turns to the stick and finds that it’s a lot more fun than the others.

A stick can be a sword!  It can be a lute!  It can be a giant’s club!  The book shows the prince letting his imagination rip as he explores all the possibilities of a simple stick.  In the end, he also learns about kindness and giving in a lovely little twist in the plot.  It’s an utterly charming book, with a message that we can’t get enough of this time of year.   It just may inspire you to wrap up an old broom handle as a gift for your kids and see where their imagination goes.

"The Christmas Stick" is a fresh new story about a jaded young prince who receives more Christmas gifts than he needs or wants, except for one mysterious gift, a stick from his grandmother. AT first the prince is bored by the stick, unable to fathom its use as a toy or a gift. Then he gets inspiration from a visiting cousin: the stick can become whatever he imagines! It can be a shepherd's crook, an oar, a spear, a trumpet, even a snake to wrestle with! In the end, the gift of the stick is treasured by the spoiled young prince, for it allows him to nourish his imagination, which in turn, leads him to become aware of others, and the need to return generosity by giving to them. The touching ending scene of "The Christmas Stick" is a culmination of the perfect gift sharing experience: watching a child grow and learn to care for others. —Midwest Book Review

▼▲
I'm the author/artist and I want to review The Christmas Stick: A Christmas Story.
Back
Back