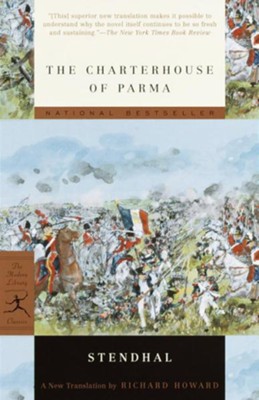 The Charterhouse of Parma - eBook

▼▲
Balzac considered it the most important French novel of his time. André Gide later deemed it the greatest of all French novels, and Henry James judged it to be a masterpiece. Now, in a major literary event, Pulitzer Prize-winning poet and distinguished translator Richard Howard presents a new rendition of Stendhal's epic tale of romance, adventure, and court intrigue set in early nineteenth-century Italy.
The Charterhouse of Parma chronicles the exploits of Fabrizio del Dongo, an ardent young aristocrat who joins Napoleon's army just before the Battle of Waterloo. Yet perhaps the novel's most unforgettable characters are the hero's beautiful aunt, the alluring Duchess of Sanseverina, and her lover, Count Mosca, who plot to further Fabrizio's political career at the treacherous court of Parma in a sweeping story that illuminates an entire epoch of European history.
"Stendhal has written The Prince up to date, the novel that Machiavelli would write if he were living banished from Italy in the nineteenth century," noted Balzac in his famous review of The Charterhouse of Parma. "Never before have the hearts of princes, ministers, courtiers, and women been depicted like this. . . . One sees perfection in every detail. . . . [It] has the magnitude of a canvas fifty feet by thirty, and at the same time the manner, the execution, is Dutch in its minuteness. . . . The Charterhouse of Parma often contains a whole book in a single page. . . . It is a masterpiece."
This edition includes original illustrations by Robert Andrew Parker and Notes and a Translator's Afterword by Richard Howard.

▼▲
The Modern Library has played a significant role in American cultural life for the better part of a century. The series was founded in 1917 by the publishers Boni and Liveright and eight years later acquired by Bennett Cerf and Donald Klopfer. It provided the foundation for their next publishing venture, Random House. The Modern Library has been a staple of the American book trade, providing readers with affordable hardbound editions of important works of literature and thought. For the Modern Library's seventy-fifth anniversary, Random House rede-signed the series, restoring as its emblem the running torchbearer created by Lucian Bernhard in 1925 and refurbishing jackets, bindings, and type, as well as inaugurating a new program of selecting titles. The Modern Library continues to provide the world's best books, at the best prices.

▼▲
"The Charterhouse of Parma has never sparkled in English with such radiance as it does in Richard Howard's new translation."
--Edmund White

▼▲
I'm the author/artist and I want to review The Charterhouse of Parma - eBook.
Back
Back