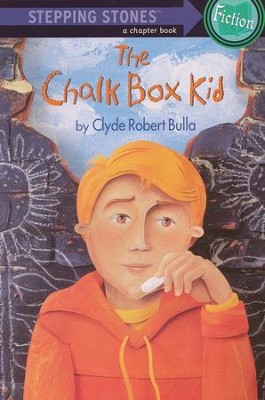 ▼▲
Gregory just moved to a new house in a new neighborhood, and is getting off to the wrong start at his new school. Gregory wants to plant a garden at home, but there isn't any soil everything surrounding the house is cement. That's when Gregory discovers the burned up chalk factory behind the house and begins to make his own garden-out of chalk!

A classroom favorite about the power of art and creativity.

A new neighborhood. A new school. A lonely birthday. Life isn’t easy for nine-year-old Gregory. Then he finds an abandoned chalk factory behind his house. It’s a secret place, just for him! Now he can draw anything he imagines on the dark brick walls. What amazing thing will Gregory draw first?

▼▲
Clyde Robert Bulla (1914–2007) was born on a farm near King City, Missouri. He went to a one-room country school. Reading and writing were his favorite subjects, and by the time he was seven, Bulla knew he wanted to be a writer. After years of writing magazine stories and novels and working on his hometown newspaper, he found that he really wanted to write for children. More than 70 of his books for boys and girls have been published.

Thomas B. Allen (1928–2004) was an American expressionist painter and illustrator known for his role in the rise of visual journalism in the 1950s and 1960s. Later in his career, he began illustrating children’s books such as The Chalk Box Kid, In Coal Country, and Grandma’s General Store: The Ark.

▼▲
I'm the author/artist and I want to review The Chalk Box Kid - eBook.
Back
Back