Skip to main content
The Catholicity of the Church
By: Avery Dulles
Stock No: WW266951 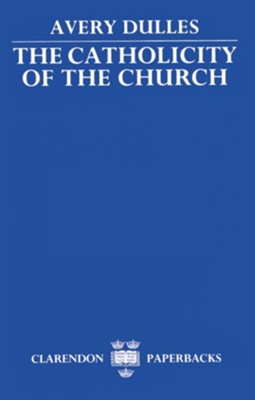 The Catholicity of the Church

▼▲
Avery Dulles, well-known for several previous works in ecclesiology, including Models of the Church, here surveys a theme that demands new treatment in the present global and ecumenical context. Nearly all Christians profess allegiance to the holy catholic church, but the meaning of the term
"catholic" is widely disputed. This book investigates the historical use of the word and the various aspects of catholicity. Beginning with the word's divine source in Christ as "the first-born of all creation," Dulles goes on to discuss such topics as the "catholic principle," Catholicism as a
specific ecclesial type, and the possibility of a "Protestant Catholicism." He concludes by asking how, given the current "parochial" appearance of Christianity, any Christian church can plausibly claim to be catholic.

▼▲
"The premier ecclesiastical thinker of our time."--America
"Yet another fine ecclesiological monograph. The Catholicity of the Church is made attractive by the intellectual virtues we have come to associate with its author."--Theological Studies
"This is a fine book, providing a framework for fruitful dialogue among Christians of all traditions."--Journal of Theological Studies
"Once again, Dulles has given us a comprehensive, balanced, and ecumenically sensitive study."--Journal of Religion
"This is a refreshing and challenging book, and is of considerable ecumenical importance."--Oliver Rafferty, S.J., The Month

▼▲
I'm the author/artist and I want to review The Catholicity of the Church.
Back