The Case of the Orphaned Bassoonists - eBook
By: Barbara Wilson 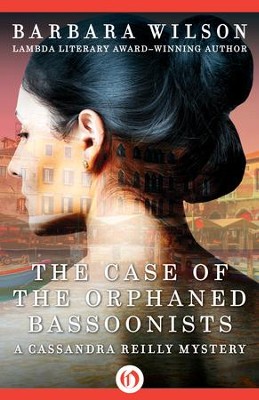 The Case of the Orphaned Bassoonists - eBook

▼▲
Cassandra Reilly travels to Venice to solve the mystery of a missing bassoon, and lands in the midst of an international cast of characters who all have something to hide
At the Venice-based symposium on women musicians of Vivaldi’s time, an instrument has gone missing: an antique bassoon, an invaluable family heirloom—and bassoonist Nicky Gibbons stands accused of the theft. Determined to clear her name, Nicky calls Cassandra Reilly—lesbian translator and part-time sleuth extraordinaire—and summons her to the City of Water. Fifteen scholars and musicians are attending the symposium, and each has a multitude of quirks and secrets—as well as motive to steal the bassoon. As Cassandra investigates, she immerses herself in the world of Baroque music, the tangle of personal intrigues at the symposium, and a second mystery involving the orphaned bassoonists of eighteenth-century Venice.
Wry, intelligent, and atmospheric, The Case of the Orphaned Bassoonists is the fourth and final book in the Cassandra Reilly Mystery series, which begins with Gaud&iacute; Afternoon, Trouble in Transylvania, and The Death of a Much-Travelled Woman.

▼▲
Barbara Wilson is the pen name under which Barbara Sjoholm has published the Cassandra Reilly Mysteries and the Pam Nilsen Mysteries. Gaud&iacute; Afternoon, of the Cassandra Reilly series, won a Lambda Literary Award and a Crime Writers’ Association Award, and was made into a film by the same name. Like her detective Cassandra Reilly, Sjoholm is a translator, but of Norwegian and Danish books. In addition to her fiction and the memoir Blue Windows, Sjoholm is the author of the travel books The Pirate Queen: In Search of Grace O’Malley and Other Legendary Women of the Sea, Incognito Street, and The Palace of the Snow Queen. Her essays have appeared in the American Scholar, Harvard Review, the New York Times, Smithsonian, and Slate, among other publications.

▼▲
"Venice, Vivaldi, international intrigue, lesbians with bassoons—if you have a hankering for any of these, this book is for you! . . . The pace is fast, and the suspects aren’t who you think they are. If you can’t afford the gondola ride, put on the water for spaghetti and open this book instead!" —The Bloomsbury Review
"Droll humor, high intelligence, outrageous Edith Sitwell–like wardrobes, and a chance to revel in the best Venice offers, from the synagogues of Ghetto Nuova to the cafes on the back canals." —Kirkus Reviews
"Wilson . . . has marvelously depicted Venice and its history, introducing modern (if nutty) women personalities that should please feminist readers." —Publishers Weekly

▼▲
I'm the author/artist and I want to review The Case of the Orphaned Bassoonists - eBook.
Back
×
Back
×