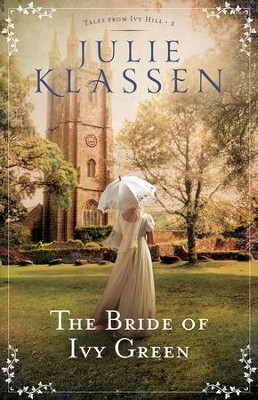 The Bride of Ivy Green #3

Much has happened in idyllic Ivy Hill in recent months, and while several villagers have found new love and purpose, questions remain--and a few dearly held dreams have yet to be fulfilled.

Jane Bell is torn. Gabriel Locke is back and has made his intentions clear. But Jane is reluctant to give up her inn and destine another man to a childless marriage. Then someone she never expected to see again returns to Ivy Hill.

Mercy Grove has lost her school and is resigned to life as a spinster, especially as the man she admires seems out of reach. Should she uproot herself from Ivy Cottage to become a governess for a former pupil? Her decision will change more lives than her own.

A secretive new dressmaker arrives in the village, but the ladies soon suspect she isn't who she claims to be. Will they oust the imposter, or help rescue her from a dangerous predicament?

In the meantime, everyone expects Miss Brockwell to marry a titled gentleman, even though her heart is drawn to another. While the people of Ivy Hill anticipate one wedding, an unexpected bride may surprise them all.

▼▲
Julie Klassen worked in Christian publishing for 16 years and now writes full-time. Three of her novels have won the Christy Award for Historical Romance. Julie has also won the Minnesota Book Award, Christian Retailing's Best Award, and the Midwest Book Award, and has been a finalist in the RWA RITA Awards and ACFW Carol Awards. Julie and her husband have two sons and live in St. Paul, Minnesota. For more information, visit www.julieklassen.com and www.talesfromivyhill.com.

▼▲
I'm the author/artist and I want to review The Bride of Ivy Green #3.
Back
Back