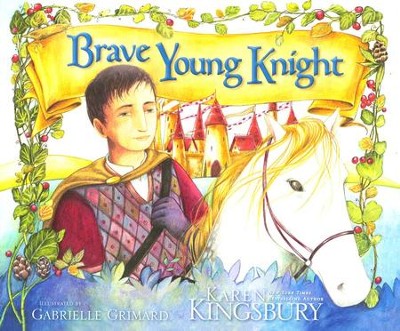 ▼▲
What distinguishes a great leader? Is he faster, stronger, or smarter than everybody else? Not necessarily, as one young knight learns. Join him as he competes with other boys to become prince of the land---and discovers that those who have the courage to fight for what is right and true are the real winners. 40 pages, hardcover from Zonderkidz.

▼▲
In this picture book, Karen Kingsbury tells the story of a boy in competition with other young knights to become prince of all the land. In a series of contests and competitions, the king recognizes the brave young knight as the winner, not because he was the fastest or strongest, and not because he was smarter or more cunning than the other knights. Rather, the brave young knight is the winner because he doesn’t follow the crowd, instead making decisions based on what is right and true and in accordance with his faith. The moral of the story is that the bravest young boys are those who exhibit the strongest character.

Gabrielle Grimard has been drawing since she was a very young child. Born in Montreal, Canada, she studied Fine Arts at Concordia University. She began her career as a muralist, painting numerous walls in commercial buildings in the Montreal area. She now lives in the Eastern Townships with her chickens, two children, and husband, who is a wood boat builder. They share an old barn as their creative studio.

▼▲
This once-upon-a-time tale tells about a young knight who is kind, brave, generous, and honest. It's his honesty that comes under trial. Even in the face of almost certain defeat, with the moral support of his father, the knight wins through and gains the prize. The Brave Young Knight is a most intriguing morality saga. One Bible verse appears before the story actually begins. Other than that, the author leaves the figuring out of the moral to the reader and his/her mentors. That wont be hard because this attractive, Christian-based legend sets the audience to thinking deep thoughts. Pre-readers who are used to listening to stories will enjoy hearing this book. Older children will be able to read it for themselves.

Karen Kingsbury has written books for many age groups. She has a true sense of legend and knows how to apply it to stories which teach. With a background in fine arts, Gabrielle Grimard brings this same sense of legend to her painting. They are full of affective color and winsome with human expression. The Brave Young Knight is a happy choice for school, family, and church use.  Donna Eggett, www.ChristianBookPreviews.com

Q: what age group is The 'brave young knight" written for

This is written for children ages 4 to 7.

▼▲
I'm the author/artist and I want to review The Brave Young Knight.
Back
Back