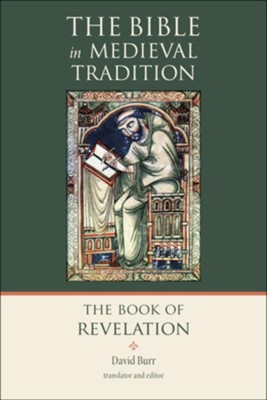 The Book of Revelation: The Bible in Medieval Tradition

In this fifth volume of The Bible in Medieval Tradition (BMT), David Burr addresses exegesis of the book of Revelation from the twelfth through the fourteenth centuries, discussing the historical context and providing freshly translated samples. After reviewing exegetes of the early church, Burr turns to the influential Richard of Saint Victor, then focuses on a procession of Franciscans that includes such figures as Joachim of Fiore, Alexander Minorita, and Bonaventure, and finally concludes with the fourteenth-century Nicholas of Lyra. The central figure in this volume is John Olivi, a major apocalyptic commentator who changed the interpretive tradition dramatically.

Medieval exegesis of the Apocalypse from Richard of St. Victor through Nicolas of Lyra

In this volume Franciscan scholar David Burr concentrates on the mendicant contribution to the book of Revelation. Clashing interpretive strategies developed, mirroring authority structures in the context of the new institutional framework of the university, the new methodology of scholasticism, and expanding papal authority. By the early fourteenth century a clear victory of one strategy and one structure emerges in the work of Pierre Auriol and Nicholas of Lyra, and, conversely, the defeat of another in the posthumous condemnations of Petrus Iohannis Olivi and, to some extent, Joachim of Fiore.

This is the fifth volume of The Bible in Medieval Tradition (BMT), a series designed to reconnect the church with part of its rich history of biblical interpretation.

▼▲
David Burr (PhD, Duke University) is professor emeritus of history at Virginia Tech. He received the St. Bonaventure medal for lifetime achievement in Franciscan studies in 2005 and is currently working on a critical edition of Petrus Iohannis Olivi's commentary on the gospel of Matthew.

▼▲
I'm the author/artist and I want to review The Book of Revelation: The Bible in Medieval Tradition.
Back
×
Back
×