Skip to main content
The Bones of Makaidos #4
By: Bryan Davis
Stock No: WW253780 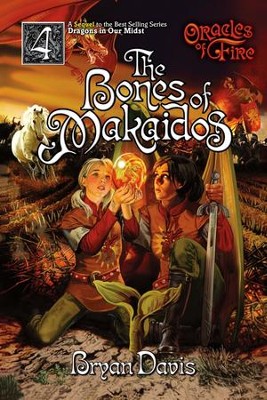 ▼▲
As the fiery wall of Abraham dies away, the people of Second Eden wait for the coming war. Giants and dragons will soon break through the barrier and attack, powered by the hatred they have stored up for four years. Although they have prepared for the onslaught, a spy has come among them, one who learns their weaknesses.

Meanwhile, Bonnie, Shiloh, and Sapphira leave their protective hideout deep in the heart of Hades. Equipped with a new secret weapon, they are now ready to join Billy, Walter, Ashley and the others in second Eden to help them and the good dragons fight the invading army.

As the battle rages, a new helper arises, the only one who knows how to use Bonnie's secret weapon, but the spy is ready to destroy him the moment he arrives. And with Devin the dragon slayer in their midst, proving that more evil forces have descended upon their world, the people of New Eden don't know whom to trust.

▼▲
The two Oracles of Fire, Sapphira and Acacia, are called upon to protect the forces of good, including Bonnie, who is pursued once again by the most powerful of all dragon slayers, Sir Devin, the dragons? bane.

▼▲
I'm the author/artist and I want to review The Bones of Makaidos #4.
Back
Back