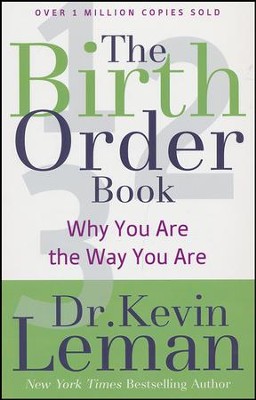 Birth order powerfully influences who you are, whom you marry, the job you choose, and the kind of parent you are. The Birth Order Book will help you understand yourself, get along better with others, overcome ingrained tendencies you never thought you could get rid of, be more successful in the workplace, and be a more effective parent. Thousands of people have unlocked the secrets of birth order already. Shouldn't you be one of them?

▼▲
The order in which we are born has a powerful, far-reaching influence on the way we interact with others--at home, at work, with friends, and in the public square. Dr. Kevin Leman's classic book on birth order is getting a new look, bringing his engaging, fascinating, and often funny observations to a new audience. With insight and wit, Dr. Leman shows readers how birth order affects personality, marriage and relationships, parenting style, career, and children. Anyone who wants to gain understanding about the ways they interact with others--and even overcome ingrained tendencies they never thought they'd be rid of--will love Dr. Leman's insightful book.

▼▲
Dr. Kevin Leman is an internationally known psychologist, radio and television personality, and speaker who has taught and entertained audiences worldwide with his wit and commonsense psychology. He has made house calls through hundreds of radio and television programs, such as Fox & Friends, The View, FOX's The Morning Show, Today, Bill Bennett's Morning in America, The 700 Club, CBS's The Early Show, In the Market with Janet Parshall, CNN, and Focus on the Family, and has served as a contributing family psychologist to Good Morning America. A bestselling and award-winning author, Dr. Leman has written more than fifty books, including The Birth Order Book, Making Children Mind without Losing Yours, and Have a New Kid by Friday. Dr. Leman and his wife, Sande, live in Tucson, Arizona. They have five children and four grandchildren.

▼▲
I'm the author/artist and I want to review The Birth Order Book, Repackaged Edition.
Back
Back