The Bible: The Epic MiniSeries DVD 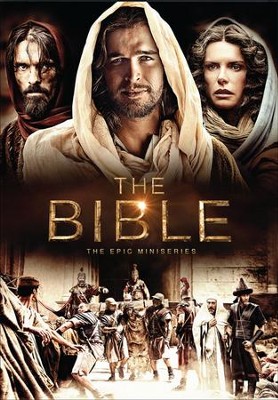 The Bible: The Epic MiniSeries DVD

“I’ve probably seen most, if not all, of the films about the Bible produced in the past 50 years. This one stands alone, in a class by itself, as the best I’ve ever seen. Brilliantly produced with stunning cinematography, a Hans Zimmer score and academy-worthy acting, it stands head-and-shoulder above the rest. Too many 'Bible' films end up feeling like documentaries, with stilted dialog, second-class sets, and narration that feels like a lecture. In contrast, this series, draws you into the story from the start. The key to its effectiveness is that it lets the Bible speak for itself, without commentary, excuse or qualification, which makes it unique. This is living history at its best!” —Dr. Rick Warren, Author, What On Earth Am I Here For?, The Purpose Driven Life

“Not since Cecil B. DeMille’s production of The Ten Commandments has a powerful, major Hollywood production like ‘The Bible’ been released worldwide. This miniseries, featuring the music of Oscar-winner Hans Zimmer, will help millions to experience God’s Word in a visual, dramatic way.” —Geof Morin, American Bible Society

“I love the passion and enthusiasm that my friends Mark Burnett and Roma Downey have invested in their new History Channel series, The Bible. Rather than a word-for-word documentary, this project combines drama and history in a way that captures the essence and heart of the Gospel and the broader biblical story. I’m convinced that The Bible represents a unique opportunity to convey God’s redemptive message to a broad audience—many of whom may be unfamiliar with the narrative of Scripture. My prayer is that many lives will be impacted not only by the beauty and quality of the production, but by the Truth that lies at the center of the story.” —Jim Daly, President, Focus on the Family

“Mark Burnett and Roma Downey’s miniseries, The Bible, proves that when talent and passion collide, the outcome is spectacular. Having spent time with them on the set, Victoria and I witnessed firsthand not only the genius of Mark Burnett and Roma Downey but the deep and abiding passion they possess for God’s Word. Every aspect of this production from the acting to the poignant storytelling is accomplished with excellence. In particular, I found Roma’s portrayal of Mary, the mother of Jesus, to be both moving and genuine. Mark and Roma have succeeded in doing what few before them have done; they have produced a work that truly reflects the masterpiece that is the Holy Bible.” —Joel Osteen, Senior Pastor of Lakewood Church, #1 NY Times bestselling author

"Unlike any other film or miniseries I’ve ever encountered, The Bible brings the Word of God to life in the full richness of its scope, diversity, power, and magnificence. History and mystery collide as Mark Burnett and Roma Downey infuse every scene with their divinely inspired vision for sharing the poetic beauty and timeless wisdom of Scripture. This series helps us all to experience the flesh-and-blood stories of the Bible in a new light and draws us to the Divine Author who continues writing His eternal masterpiece. You will be enthralled, encouraged, and inspired by The Bible – seeing really is believing!" —Bishop T.D. Jakes, author, pastor, The Potter’s House

"The Bible, the made-for-TV video, seeks to introduce a new generation to the Bible, the great book of the works of God. It does so with great passion, exquisite skill and cinemagraphic triumph. Through the lens of the producers of this telling of the greatest story we can see at times with sweeping scope and at other moments with touching detail how it is that the Bible remains the most significant book—the book of the Word of God.
The challenge of presenting in 10 episodes the whole of the Bible highlights how this unique book continues to be read in different ways through different lenses. Yet, the Bible is the norm that has guided countless generations and millions upon millions along the pathway that leads to God’s love. My hope is that this video presentation, The Bible, may bring alive its many stories in people’s minds and hearts so that they may be drawn to rediscover the Bible and rejoice in its saving message. —Cardinal Donald Wuerl, Archbishop of Washington

“Because I grew up knowing about the bible but not understanding it, I’m overwhelmed with excitement about The Bible series. It’s impossible to put into words the awe-inspiring emotions I felt watching the Bible stories come to life on the screen. The attention to detail is impeccable. The acting is deeply moving. The music is breathtaking. I’m waiting with anticipation to see all the lives The Bible Series will impact. Mark Burnett and Roma Downey have given the world a gift.” —Craig Groeschel, pastor, Lifechurch.tv

“This series is stunning – superbly acted and beautifully produced. It brings the stories of the Bible to life in an extraordinary way.” —Nicky Gumbel, Alpha International

Four time Emmy Award winner Mark Burnett has produced over 1,200 hours of television programming which regularly airs in over 70 countries worldwide. His current network series include Survivor (CBS), The Voice (NBC), The Celebrity Apprentice (NBC), Shark Tank (ABC), and the upcoming The Job (CBS). In last 12 months Burnett series have won their time slots on 5 nights of television in the same week. Burnett is one of very few producers to have had a renewed series on each of the four major networks. He also has a strong presence in award show franchises, having produced the "MTV Movie Awards" from 2007 to 2011, the annual "People’s Choice Awards" since 2010, the "Video Game Awards" (Spike) and the 2011"Primetime Emmy Awards". Burnett is currently producing and distributing ten hour mini series on The Bible (with his wife Roma Downey - Star of Touched by an Angel) for air globally in Spring 2013. Mr. Burnett has been named one of the world's most influential people by TIME Magazine and also listed as TV Guide’s most valuable player. He has won BRANDWEEK’S Marketer of the Year Award, The Brandon Tartikoff Legacy Award, the PGA Norman Lear Award and the prestigious ROSE D’OR FRAPA Format Award. Burnett was inducted into the Broadcasting and Cable Hall of Fame and was honored in 2010 with a star on Hollywood's Walk of Fame. He served two elected terms on the Board of Directors for the British Academy of Film and Television Arts in Los Angeles.

A celebrated, Emmy-nominated actress Roma Downey is best known for her nine seasons as the tender-hearted angel on the hit CBS show Touched by an Angel. Roma starred in over 200 episodes and her work as the compassionate angel inspired millions of people around the world and earned Roma multiple best actress nominations for Emmy’s and Golden Globe awards. Born in Ireland and classically trained in London Ms Downey has performed on stage with the famed Abbey Theatre Company and has appeared both on and off Broadway. She played the leading role of Jackie Kennedy Onassis in the Emmy award winning six hour mini series for NBC called A Woman Named Jackie. Ms Downey not only starred in, but executive produced seven television movies for The CBS network, among them Borrowed Hearts with Eric Mc Cormack and Second Honeymoon with Tim Matheson. She is the executive producer of the children's DVD and book series Little Angels and its companion Little Angels Storybook Bible. Downey is currently producing a ten hour miniseries, The Bible with her husband, Mark Burnett. This is being produced under their company LightWorkers Media and is the first collaboration of this husband and wife team. Ms Downey not only produced the series but stepped into the role of Mary the Mother of Christ The Bible will air in the spring of 2013 and then is set to air globally. Ms Downey and Mr Burnett have co-authored a companion book to the series A Story of God and all of Us. The book is to be published this Spring by Faith Words. For many years Ms Downey has been a spokesperson for "Operation Smile" a volunteer organization that brings free surgeries to children around the globe with facial deformities. She has travelled to third world and developing countries making fund raising films on their behalf.

Q: Does it have spanish subtitle?

Yes, there are Spanish subtitles.

This is a region one DVD.

Q: What story's are on each disk? There is no guide with the DVD for finding a specific story. Is there a place where I can copy a guide.

Below are each of the episodes and which discs they are on.

Disc 1
In the Beginning (Noah, Abraham)
Exodus (Moses and the Exodus)

Q: are there subtitles in Spanish

Yes, there are subtitles in Spanish, French and English.

▼▲
I'm the author/artist and I want to review The Bible: The Epic MiniSeries DVD.
Back
×
Back
×