Skip to main content
The Beginnings of the Cult of Relics
By: Robert Wisniewski
Stock No: WW675563 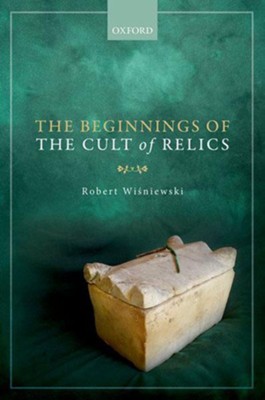 The Beginnings of the Cult of Relics

Christians have often admired and venerated the martyrs who died for their faith, but for a long time thought that the bodies of martyrs should remain undisturbed in their graves. Initially, the Christian attitude towards the bones of the dead, saint or not, was that of respectful distance. The Beginnings of the Cult of Relics examines how this attitude changed in the mid-fourth century. Robert Wisniewski investigates how Christians began to believe in the power of relics, first over demons, then over physical diseases and enemies. He considers how the faithful sought to reveal hidden knowledge at the tombs of saints and why they buried the dead close to them. An essential element of this new belief was a strong conviction that the power of relics was transferred in a physical way and so the following chapters study relics as material objects.

Wisniewski analyses how contact with relics operated and how close it was. Did people touch, kiss, or look at the very bones, or just at tombs and reliquaries which contained them? When did the custom of dividing relics begin? Finally, the book deals with discussions and polemics concerning relics, and attempts to find out the strength of the opposition which this new phenomenon had to face, both within and outside Christianity, on its way to become an essential element of medieval religiosity.

Robert Wiśniewski is Associate Professor of Ancient History at the University of Warsaw. His research focuses on religious changes in Late Antiquity, with particular attention to the cult of saints, divination, clergy, and demons.

▼▲
"fills a gap by focusing on body relics in late antiquity ... For such further studies his highly recommended book provides a solid and broad basis." -- Andreas Merkt, Bryn Mawr Classical Review
"Wi?niewski adeptly charts the origin, development, and manifestations of relic thaumaturgy, mostly relying on textual and occasionally also on archaeological sources." -- Ivana Petrovic, University of Virginia, Greece & Rome
"Thematically presented and beautifully written, [Wisniewski] examines the evidence and concludes convincingly. The narrative flow is logical and satisfying, and all this brings unexpected clarity to a subject that could have been obliterated by detail." -- Adrian Spooner, Classics for All

▼▲
I'm the author/artist and I want to review The Beginnings of the Cult of Relics.
Back