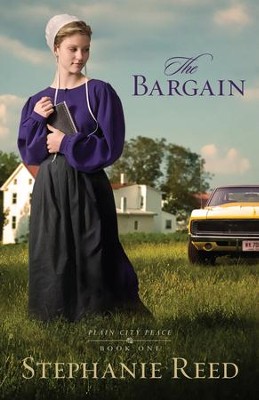 The Bargain: A Novel - eBook

▼▲
It's 1971, and betsie Troyer's peaceful and predictable life is about to become anything but.

When her parents decide to leave the Amish, nineteen-year-old Betsie and her seventeen -year-old sister Sally feel abandoned. Left to fend for themselves under the dubious guidance of a nearly deaf aunt, the girls keep their parents' secret as long as possible, hoping they'll return before anyone learns the truth--a truth that will end all hopes of Betsie's marriage to Charlie Yoder.

▼▲
It's 1971, and Betsie Troyer's peaceful and predictable life is about to become anything but.

When their parents flee the Amish, nineteen-year-old Betsie and her seventeen-year-old sister Sadie are distraught. Under the dubious guidance of a doting aunt, the girls struggle to keep the secret, praying their parents will return before anyone learns the truth a truth that may end all hopes of Betsie's marriage to Charley Yoder.

Worse still, Betsie must learn a trade while she boards with a dysfunctional Englisher family: Sheila, a twelve-year-old desperately searching for a friend and in dire need of her mother; the free-spirited mother, who runs off to find herself on the stage; the angry father whose structured life crumbles; and Michael, a troubled college dropout nearly killed in the Kent State Massacre.

Thrust into the English world, Betsie must grapple with the realities of war and miniskirts, pot parties and police brutality, protests and desertion. Can she help the Sullivan family and find peace in her new surroundings, or must she forget the bargain she made and seek refuge back in Plain City with protective and reliable Charley?