Skip to main content
The Artful Match #3
By: Jennifer Delamere
Stock No: WW219221 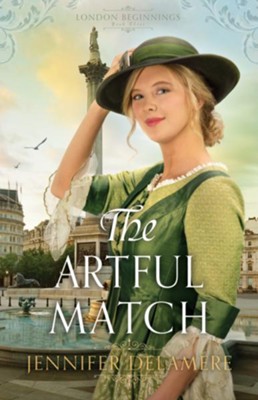 Cara Bernay has never fit in. At loose ends in 1881 London after a near tragedy costs her a job, she befriends a carefree artist. With his help, she begins planning a new life and developing her own artistic talent. But soon Cara finds herself at odds with the artist's brother-a handsome but arrogant earl forcing his brother back to a "respectable" life.

Henry Burke, the Earl of Morestowe, feels the weight of growing financial burdens. His younger brother is the one person who can save their family, and Henry needs him back home. Despite misgivings about Cara's mysterious background, Henry sees she's a positive influence on his brother and on Henry's young ward, and he strikes a deal with her to return with them to their estate.

But the family has their own secrets, and when Cara, drawn ever closer to Henry, stumbles onto the truth, she must choose between following her heart and pursuing a bold plan that could bring disaster.

▼▲
Jennifer Delamere's debut Victorian romance, An Heiress at Heart, was a 2013 RITA Award finalist in the inspirational category. Her follow-up novel, A Lady Most Lovely, received a starred review from Publishers Weekly and the Maggie Award for Excellence from Georgia Romance Writers. Jennifer earned a BA in English from McGill University in Montreal, Canada, where she became fluent in French and developed an abiding passion for winter sports. She's been an editor of nonfiction and educational materials for nearly two decades and lives in North Carolina with her husband. Learn more at www.jenniferdelamere.com.

▼▲
I'm the author/artist and I want to review The Artful Match #3.
Back
Back