Skip to main content
SPRING CYBER EVENT STARTS NOW: And it's a really BIG deal! Up to 88% off through 5/24>
The Amish Clockmaker #3
By: Mindy Starns Clark, Susan Meissner
Stock No: WW957381 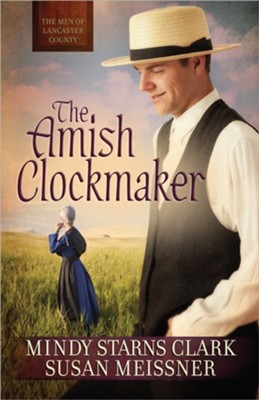 ▼▲
Newlywed Matthew Zook is expanding his family's tack and feed store when a surprising property dispute puts the remodel on hold--and raises new questions about the location's mysterious past.

Decades earlier, the same building housed a clock shop run by a young Amish clockmaker named Clayton Raber. Known for his hot temper, Clayton was arrested for the murder of his beloved wife, a crime almost everyone--including his own family members--believed he'd committed, even after charges were dropped. Isolated and feeling condemned by all, Clayton eventually broke from the church, left Lancaster County, and was never heard from again.

Now the only way Matthew can solve the boundary issue and save his family's business is to track down the clockmaker. But does this put Matthew on the trail of a murderer?

A timeless novel of truth, commitment, and the power of enduring love, where secrets of the past give way to hope for the future.

Matthew and Amanda Zook discover an old but beautifully ornate clock. After examining it, they discover a secret that indicates it belonged to the Amish clockmaker Clayton Raber, who, fifty years earlier, was arrested for the murder of his wife, despite his claims of innocence. Can they help him now?

Mindy Starns Clark is the bestselling author of more than 20 books, both fiction and nonfiction, with over a million copies sold. Mindy and her husband, John, have two adult children and live in Pennsylvania. www.mindystarnsclark.com

Susan Meissner is a multi-published author, speaker, and writing workshop leader with a background in community journalism. Her novels include The Shape of Mercy, named by Publishers Weekly as one of the 100 Best Novels of 2008 and a Carol Award winner. She is a pastor’s wife and the mother of four young adults. When she's not writing, Susan writes small group curriculum for her San Diego church. Visit Susan at her website: www.susanmeissner.com, on Twitter at @SusanMeissner, or at www.facebook.com/susan.meissner.

"This story will take you on a heart-rending journey of live, betrayal, forgiveness and healing."
—Brandi Fitzpatrick, RambleSAHM.com

"The Amish Clockmaker is sure to tug at your heart and will have you examining how you treat others."
—Vickie McDonough, bestselling author of 35 books and novellas, including the Land Rush Dreams series

"Clark and Meissner developed the characters in a way that entices the readers into the lives of the Amish and keeps them there until the very end."
—Teresa Rice

"Once I started reading this book, I found it hard to put the book down!"
—Elaine Shorb

"This heartwarming story calms the soul while reminding us of the kindness that still exists."
—Melissa Henderson

"I recently received The Amish Clockmaker and loved it. I was intrigued that it featured an Amish male character as the protagonist, which is rare in the realm of Amish fiction. That, plus it being a mystery that kept me turning page after page late at night."
—Miriam Sarzotti, giftsofhisglory.com

"These ladies took time to research, observe and interview the Amish to provide an accurate account of their way of life. I would highly recommend this book to the reader who enjoys a great story woven with the utmost integrity."
—Sherry Anderson Arritt

▼▲
I'm the author/artist and I want to review The Amish Clockmaker #3.
Back
Back