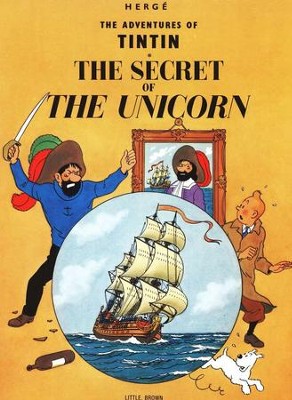 The Adventures of Tintin: The Secret of the Unicorn

▼▲
Whether he's trolling the high seas for treasure or blasting off for the moon, young reporter-sleuth Tintin and his faithful dog, Snowy, have delighted readers everywhere for generations with their timeless adventures. Join Tintin and Snowy as they tackle the toughest mysteries around the world in The Secret of the Unicorn.

Tintin and Captain Haddock discover that the Unicorn, a pirate ship, may contain a lost treasure. Their search to uncover the mystery of the ship leads them to their next adventure, finding Red Rackham's Treasure. Recommended for ages 9 and up.

Georges Rémi was born in Brussels, Belgium in 1907. He became interested in art at a young age and began drawing. In 1924 he began signing his drawings with the name Hergé, which stood for the French pronunciation of his initials R.G. After serving in the military, Hergé began working at a children's weekly magazine where Tintin and Snowy first appeared. Eventually these characters became the stars of a series of popular books published throughout the world. Hergé died in 1983.

▼▲
In this classic graphic novel: Tintin stumbles across a model ship at the Old Street Market. Only it isn't just any model ship-it's the Unicorn, carved by one of Haddock's ancestors, and it holds a clue to finding pirate treasure!

▼▲
Hergé, one of the most famous Belgians in the world, was a comics writer and artist. The internationally successful The Adventures of Tintin are his most well-known and beloved works. They have been translated into 38 different languages and have inspired such legends as Andy Warhol and Roy Lichtenstein. He wrote and illustrated for The Adventures of Tintin until his death in 1983.

▼▲
I'm the author/artist and I want to review The Adventures of Tintin: The Secret of the Unicorn.
Back
Back