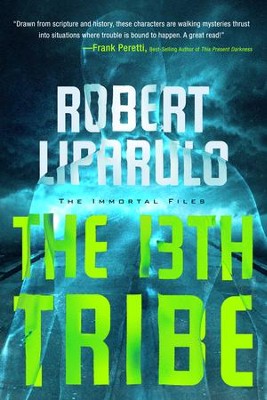 ▼▲
Immortals from the time of Moses roam the earth on a quest for justice...and heaven, but one man stands in the way.

In 1476 BC, the Israelites turned their backs on the One True God by worshipping a golden calf. For their transgression, forty were cursed to walk the earth forever. Banished from their people, they formed their own tribe, The 13th Tribe.

Now three and a half millennia later, the remnant of this Tribe continues to seek redemption through vigilante justice--goaded by dark forces in the spiritual realm. They are planning a bold strike modeled on the Israelite's conquest of Canaan: the complete destruction of a major city--only now, they possess the horrific technology of modern weapons to ensure their success.

When a group of immortal vigilantes threatens millions, only one man is brave enough to stand in their way.

Their story didn’t start this year&hellip;or even this millennium.

It began when Moses was on Mt. Sinai. Tired of waiting on the One True God, the twelve tribes of Israel began worshipping a golden calf through pagan revelry. Many received immediate death for their idolatry, but 40 were handed a far worse punishment—endless life on earth with no chance to see the face of God.

This group of immortals became the 13th Tribe, and they’ve been trying to earn their way into heaven ever since—by killing sinners. Though their logic is twisted, their brilliance is undeniable. Their wrath is unstoppable. And the technology they possess is beyond anything mere humans have ever seen.

Jagger Baird knows nothing about the Tribe when he’s hired as head of security for an archaeological dig on Mt. Sinai. The former Army Ranger is still reeling from an accident that claimed the life of his best friend, his arm, and his faith in God.

The Tribe is poised to execute their most ambitious attack ever and the lives of millions hang in the balance. When Jagger’s wife and son are caught in the crossfire, he’ll stop at nothing to save them. But how can one man stand against an entire tribe of immortals?

"Liparulo plunges deep into the pages of Scripture to find intriguing what-if’s and stunning revelations—all woven into a tale that is both skin-tinglingly supernatural and thought-provokingly real. Packed with high-tech gadgetry, action, and heart . . . Read this novel! Seriously!" —TED DEKKER, New York Times best-selling author of Forbidden and the Circle Series

"The author of Comes a Horseman ushers in an exciting new series with this action-packed and intricately plotted spiritual thriller that should appeal to fans of Frank Peretti and Oliver North." —Library Journal

"Liparulo opens the Immortal Files series with a bang . . . Liparulo has concocted a fast-moving, imaginative narrative that examines moral questions . . . every reader is in for roller-coaster action, competently done, with a late-breaking major plot curve that leaves the door open for more." —Publishers Weekly

"If you’re a fan of suspense or biblical fiction, this is one book you won’t want to miss. Its mind-blowing action will keep readers totally immersed." —RT Book Review, 4 1/2 stars

▼▲
This book posits what might have happened to some who disobeyed God many years ago: When the believers grew tired of waiting for Moses, they made and worshipped a golden calf. Many worshippers were struck dead but 40 of them were punished with immortality. They became the 13th Tribe and are on a quest to get back in Gods good graces, but their methods are wicked and incomprehensible to regular folks. If youre a fan of suspense or biblical fiction, this is one book you wont want to miss. Its mind-blowing action will keep readers totally immersed. - 4 1/2 stars Romantic times

▼▲
Liparulo (Comes a Horseman) opens the Immortal Files series with a bang: an intruder is shot at MicroTech, a supplier to the Pentagon. That intruder is a member of a team of vigilantes, who have amazing technology and even more amazing history: they go back to a time when they worshipped a golden calf while their leader Moses was away. Immortality as the 13th Tribe is the idolaters punishment, and in subsequent centuries they try to attain Gods forgivenessand end their earthly existenceby righteously killing sinners. In present-day Egypt, maimed former Army Ranger Jagger Baird provides security for an archeological dig on Mt. Sinai, and when the Tribe shows up in search of a defector, Bairds family gets caught in the crossfire. Liparulo has concocted a fast-moving, imaginative narrative that examines moral questions. Not everyone will get or care about the scriptural framework, though it will resonate for the biblically literate, but every reader is in for roller-coaster action, competently done, with a late-breaking major plot curve that leaves the door open for more. (Apr.) 2012 Reed Business Information

▼▲
I'm the author/artist and I want to review The 13th Tribe, Immortal Files Series #1.
Back
Back