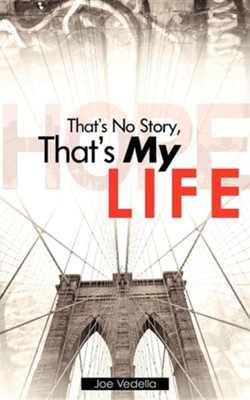 That's No Story, That's My Life

▼▲
Joe Vedella sees potential in others when the world turns a blind eye. A former heroin addict and alcoholic who bounced in and out of jails and prisons 22 times over more than two decades, Joe describes in Thats No Story, Thats My Life how he emerged from a life of addiction and criminality to recovery and responsibility. After a judge mandated Joe to a treatment program, he began the hard road to sobriety. Through a job at Fifth Avenue Presbyterian Church in Manhattan, he discovered his calling by working with homeless men and women who sleep on the church steps. In this book, Joe tells the raw story of his life and how he learned to live successfully in recovery by serving others. Along the way, he shares the stories of many of the homeless people he serves. This is a moving, sometimes painful, true story of hope. ___________________________________________________________ Everyone who knows Joe Vedella whether rich or poor, housed or homeless has been touched by him. As Manager for Homeless Ministries at the prestigious Fifth Avenue Presbyterian Church, Joe befriends the homeless and leads church volunteers by example. He walks the talk on the streets of the city, helping the congregation to practice what it preaches. Vedella grew up in the Bronx in a close-knit family of alcoholics, addicts, and co-dependents. In his early life, he became mired in a cycle of addiction, relapse, petty crime, and incarceration. He learned the system the hard way through many years in prison, detox, and homelessness. After successful stays at Blaisdell Addiction Treatment Center and the Bowery Mission, he emerged as an unpretentious man of God fond of singing survival hymns. Joe now offers hope, help, and love to people living on the streets of New York City.

▼▲
I'm the author/artist and I want to review That's No Story, That's My Life.
Back
×