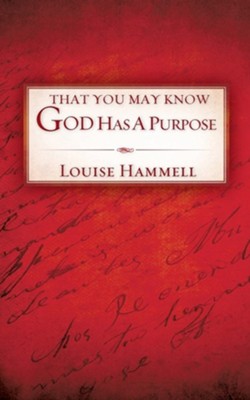 That You May Know God Has a Purpose

▼▲
Through the death of one son and the brain cancer of another, Louise had peace, trusting that her sovereign God had purpose in what He allowed to touch her life. Her story begins on the night that 17 year-old Matthew Hammell was killed by a hit and run drunk driver. From the first night of their tragedy there was evidence of God's presence. Soon after Matt died, Louise felt God leading her to write down every event in which she recognized God's hand. Her journal is the main part of the book and is filled with entries that display the glory of God. Some entries reveal God's heart in the tender ways He ministered His love and comfort. Other entries tell of all of the good things that have come out of this tragedy. Ten years after Matt died, Louise's oldest son Ron Jr. was diagnosed with brain cancer. Again God led her to pick up her pen. It is an inspiring chapter that will encourage faith for healing. Ron Jr. is cancer free The underlying message that resonates throughout her story is that God is in over-all control of the life that is yielded to Him. Wanting to seal that message, Louise wrote her final chapter on the sovereignty of God, based on the Bible. All of the benefits of walking closely with God through the worst of tragedies are seen. The reader will see that God is enough. Louise Hammell began speaking to people convicted of drunken driving in 1996, one year after her son was killed. She has since spoken to thousands. Her speech has been made into a video entitled "Matt's Mission." Her story has been covered in print, on radio, and on television.

▼▲
I'm the author/artist and I want to review That You May Know God Has a Purpose.
Back
×