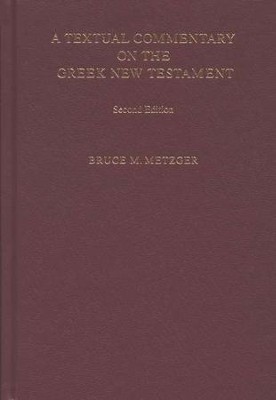 A Textual Commentary on the Greek New Testament, Second Edition (companion to the UBS Greek NT)

By: Bruce M. Metzger
Hendrickson Publishers / 2006 / Hardcover
5 out of 5 stars for A Textual Commentary on the Greek New Testament, Second Edition (companion to the UBS Greek NT) (2 Reviews) Write a Review
In Stock
Stock No: WW561642

One of the chief purposes of the commentary is to set forth the reasons that led the Committee, or a majority of the members of the Committee, to adopt certain variant readings for inclusion in the text and to relegate certain other readings to the apparatus. On the basis of a record of the voting of the Committee, as well as, for most sessions, more or less full notes of the discussions that preceded the voting, the present writer has sought to frame and express concisely (a) the main problem or problems involved in each set of variants and (b) the Committee's evaluation and resolution of those problems.

This companion to the Greek New Testament discusses textual variations based on the critical apparatus. It contains a thorough explanation of each textual decision that appears in UBS4.

What is the difference between the Omanson and Metzger?

We have included the following from each text to help you compare and contrast the two approaches. (Click on "Sample Chapter" at the bottom of this Web site page)

▼▲
I'm the author/artist and I want to review A Textual Commentary on the Greek New Testament, Second Edition (companion to the UBS Greek NT).
Back
×
Back
×