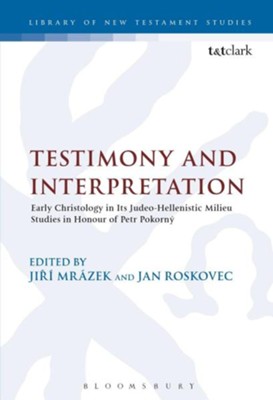 This outstanding collection of essays on Christology is in honour of Professor Petr Pokorný on the occasion of his 70th birthday. Part 1 deals with Pauline Christology and includes essays by K.P. Donfried (the nature of Paul's Jewishness), R. Hoppe (the Corinthian controversy), L. Tichý (Paul's "mysticism"), J. Schröter (the controversy in Galatians), S.E. Porter (the Dionysian background of Ephesians) and L. J. Kreitzer (the contribution of archaeological evidence when interpreting Colossians, Philemon and Ephesians).

Part 2 is devoted to the Christological problems in the synoptic traditions and includes contributions by M. Myllikoski (the relationship between the oral aspect and the written text in Mark), D.C. Allison (the problem of the hell in Jesus' message), D. Dormeyer (the hellenistic background for the notion of ascension), M. Hengel (the evidence about Jesus outside the Gospels), H. Klein (the Christology of the birth narrative in Matthew), W. Schrage (the Christology of the Sermon on the Mount).

Part 3 examines Johannine Christology and includes essays by J. Bolyki (patterns of ancient drama in John), H Hübner (the question of truth in Heidegger and in John), J.H. Charlesworth (the possible influence of the Enoch traditions on the Johannine concept of the Son of Man), S. Pisarek (the motif of vine) and K. Syreeni (incarnation in the Farewell Discourse).

The last part relates issues of christology to the church, both of old and of today and includes essays from J.M. Court, P. Ellingworth and Z. Sázava.

▼▲
I'm the author/artist and I want to review Testimony and Interpretation.
Back