EARLY CHRISTMAS SALE: Shop over 900 items up to 85% off through 9/29 >
Testament: A Soldier's Story of the Civil War - eBook
By: Benson Bobrick 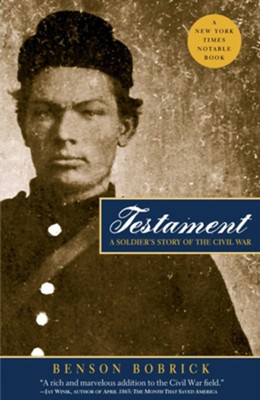 Testament: A Soldier's Story of the Civil War - eBook

▼▲
The story of the author's great-grandfather's Civil War experience, based on a remarkable set of newly discoverd letters—a powerful, moving addition to the firsthand soldiers' accounts of the Civil War.

Dear Mother,
I was very glad to hear from home this morning. It is the first time since I left Otterville. We marched from Sedalia 120 miles....I almost feel anxious to be in a battle & yet I am almost afraid. I feel very brave sometimes & think if I should be in an engagement, I never would leave the field alive unless the stars & stripes floated triumphant. I do not know how it may be. If there is a battle & I should fall, tell with pride & not with grief that I fell in defense of liberty. Pray that I may be a true soldier.

In Testament, Benson Bobrick draws upon an extraordinarily rich but hitherto untapped archive of material to create a continuous narrative of how that war was fought and lived. Here is virtually the whole theater of conflict in the West, from its beginnings in Missouri, through Kentucky and Tennessee, to the siege of Atlanta under Sherman, as experienced by Bobrick's great-grandfather, Benjamin W. ("Webb") Baker, an articulate young Illinois recruit. Born and raised not far from the Lincoln homestead in Coles County, Webb had stood in the audience of one of the Lincoln-Douglas debates, become a staunch Unionist, and answered one of Abraham Lincoln's first calls for volunteers. The ninety-odd letters on which his story is based are fully equal to the best letters the war produced, especially by a common soldier; but their wry intelligence, fortitude, and patriotic fervor also set them apart with a singular and still-undying voice.

In the end, that voice blends with the author's own, as the book becomes a poignant tribute to his great-grandfather's life -- and to all the common soldiers of the nation's bloodiest war.

▼▲
Benson Bobrick earned his doctorate from Columbia University and is the author of several critically acclaimed works, including Wide as the Waters: The Story of the English Bible and the Revolution It Inspired and Angel in the Whirlwind: The Triumph of the American Revolution. In 2002 he received the Literature Award of the American Academy and Institute of Arts and Letters. He and his wife, Hilary, live in Vermont.

▼▲
Jay Winik Author of April 1865: The Month That Saved America Benson Bobrick's Testament -- the story of his Union great-grandfather in the Civil War -- is part biography, part war story, part treasure trove of newly discovered letters. Testament is a carnival of voices -- fresh, honest, patriotic, stoic, at times haunting, and always believable. It is a marvelous and rich addition to the Civil War field.
Jeffry D. Wert Author of Gettysburg: Day Three Testament is a gripping story of one Union soldier's experiences in the Civil War. Benjamin "Webb" Baker's letters are rich in details, full of patriotism, and frank about the horror and hardships. Benson Bobrick has written a compelling book.
David J. Eicher Author of The Longest Night: A Military History of the Civil War Testament by Benson Bobrick is a touching and intimate portrait of one man's adventure during the Civil War. Rarely does a book provide such a compelling window into what war can mean to a single human being.
Frank J. Williams Chair, The Lincoln Forum From Pea Ridge to General Sherman's march to Atlanta, "Webb" Baker marched with the 25th Illinois Regiment. His letters home form a tapestry of a soldier in war....Benson Bobrick's superlative narrative enhances this great resource for a better understanding of our Civil War.

▼▲
I'm the author/artist and I want to review Testament: A Soldier's Story of the Civil War - eBook.
Back
×
Back
×